Theoretical Physicists Study the Potential of Building a Wormhole 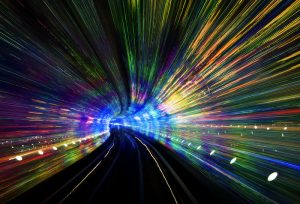 In India:  a team of theoretical physicists have an idea that may allow for the construction of a “stable” artificial wormhole, a potential shortcut through space/time that might allow travelers to cover interstellar distances in a mere instance.

More formally known as an Einstein-Rosen bridge, a wormhole is the linking of two points in spacetime via a path that is shorter than what is perceived in normal three-dimensional space. The theory behind the construction of a traversable wormhole would be to generate a black hole and connect it to a corresponding “white hole”—a spacetime construct that is the opposite of a black hole—as the destination. The resulting link between the two points would appear to be substantially shorter than the path through normal space, offering a shortcut that could reduce the travel time between the stars to mere minutes.

Unfortunately, wormholes are also theorized to be extremely unstable, and may only last for the briefest of instances before the intense gravity of their endpoints unravel the entire structure, rendering the concept useless for our purposes. Exotic matter, specifically a material that is made up of negative mass, could be used to stabilize a wormhole, but the existence of negative mass in our universe is considered to be an impossibility.

But much like a recent breakthrough in advancing the feasibility of warp drive, there may be a way around having to use an otherwise impossible negative mass to stabilize a wormhole: in physics, there are four known fundamental forces that glue the universe together, and in order of descending strength they are:

The fourth force—and by far the weakest—is gravity. Although humanity has long struggled to free itself from the most familiar of the four forces, gravity is still 29 orders of magnitude weaker than the weak interaction—that’s one hundred billion billion billionth (or one hundred octillionth) of the strength of the next most powerful interaction, the weak force, of which itself is only one millionth the strength of the even more powerful strong interaction. Gravity’s intense weakness as a fundamental force presents a conundrum in science: why is this one influence so profoundly weaker than the other three? However, if the universe is composed of more than the three spacial dimensions that we’re familiar with, the missing strength of gravity could very well reside in those unseen dimensions.

This is where the idea put forward by a team of researchers, published as a preprint paper in arXiv, comes in: if these extra dimensions do indeed exist, and if the lion’s share of gravity’s influence can be found there, this would affect how general relativity functions in the three dimension that we perceive, allowing us to build a stable artificial wormhole without the need for exotic matter. Instead of having to violate general relativity’s energy conditions to build a wormhole, the extra-strength gravity theorized to exist in these extra dimensions would circumvent the rules as we know them, with the formation of a wormhole resulting as a natural consequence of the effect, rather than in spite of it.

Needless to say, our ability to generate a traversable wormhole is still only a prospect of the distant future, considering this mode of travel requires the ability to manipulate energies on astronomical scales, but this new concept may have just taken the concept out of the realm of impossibility and into the world of the possible.