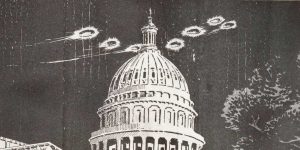 Despite receiving classified reports on the data collection efforts being made by the Pentagon’s new UAP investigations office, members of the Senate Intelligence and Armed Services committees are dissatisfied with the information being delivered to them, calling for the Department of Defense and other intelligence collection agencies to take the issue of uncovering the origins of these unidentified craft seriously, and not just report on the fact that they exist.

The briefings being received by lawmakers come four months after this year’s National Defense Authorization Act was passed, including an amendment introduced by Senator Kirsten Gillibrand (D-NY) ordering the Pentagon to establish the Anomaly Surveillance and Resolution Office; mandated to be fully operational by next month, the ASRO was granted broader authority than its predecessor, the UAP Task Force, to investigate the UAP phenomenon.

The Pentagon has also been ordered to develop an “intelligence collection and analysis plan to gain as much knowledge as possible regarding the technical and operational characteristics, origins, and intentions of unidentified aerial phenomena,” according to the Act’s text. To that end, Deputy Defense Secretary Kathleen Hicks ordered the formation of the Airborne Object Identification and Management Synchronization Group (AOIMSG) in November 2021.

However, some of the leading sponsors of Amendment SA 4281, including Senator Gillibrand herself, are critical of the intelligence gathering methods that have been developed, saying that more needs to be done to determine the origins of unidentified craft that encroach upon restricted military airspace, and not just reporting that these incidents occur.

“Senator Gillibrand believes that the DoD needs to take this issue much more seriously and get in motion,” explained one of Senator Gillibrand’s aides. “They have had ample time to implement these important provisions, and they need to show us that they are prepared to address this issue in the long-term.”

The Vice Chair of the Senate Intelligence Committee, Senator Marco Rubio (R-FL), is also dissatisfied with the progress being reported to the Committee.

“Rubio is definitely frustrated,” according to one of Senator Rubio’s aides. “They are not moving fast enough, not doing enough, not sharing enough. The anonymous aid also said that “the administration is aware of the concerns,” and that the UAP issue “is not at the level it needs to be.”

Representative Tim Burchett (R-TN), a member of the House Transportation Aviation Subcommittee, is even more critical of the DoD’s attitude regarding the issue, accusing the Pentagon of hiding critical information from Congress.

“I don’t trust the Department of Defense to get this right since leadership there has always been part of a cover-up,” Rep. Burchett said. “It is clear from the public evidence that we don’t have full control of our airspace. That’s a national security issue and it’s also unacceptable.”

However, some personnel undertaking these information gathering and coordination efforts beg to differ, with five former and current military and intelligence officials and contractor personnel with knowledge of the new endeavors saying that “they believe real progress is being made to compel agencies to take a more proactive approach—and also be more transparent about what they might know about UFO sightings and technologies,” according to Politico.

“They are putting time in; they are doing work,” according to an anonymous government contractor involved in the process. “They are going to put some bodies on it. I think they’ll probably file the reports back to Congress on time. And that is a big plus.”

Others are not as confident, with one contractor saying that while report collection procedures have improved, the involved agencies are reluctant to allocate more intelligence assets to analyzing the origins of UAPs, regardless of whether they belong to a foreign power or are non-human in design.

This contractor is concerned that the AOIMSG “is going to receive reports and collate them but they’re not going to lead any organized, serious effort to find out what the hell’s going on, nor are they going to be in a position to press anybody else to do that.” According to this same individual, Congress wants “somebody to get on the stick over there and get to the bottom of it.”

“Who’s got all the puzzle pieces, who’s doing serious analysis, and then making informed, intelligent decisions about [intelligence] collection?” he added, but the contractor also warned that other issues might take priority over the UAP issue; “you have to compete with a lot of other priority things that are going to often outrank this.”

Former Advanced Aerospace Threat Identification Program (AATIP) director Luis Elizondo also warns that there are still “pockets of information” regarding UAP that are not being shared with AOIMSG or Congress, and that could hamper future investigative efforts, and in turn undermine confidence in the government’s ability to address the issue of UAP in a meaningful manner.

“When they are made aware of information and data and videos and photos that are not being provided by DoD, it sets up a situation where the left hand doesn’t know what the right hand is doing,” warns Elizondo.

Subscribers, to watch the subscriber version of the video, first log in then click on Dreamland Subscriber-Only Video Podcast link.
2022-05-09
Previous Headline News Post: Theoretical Physicists Study the Potential of Building a Wormhole
Next Headline News Post: “A Spring-less Year”: No End in Sight for India and Pakistan’s Prolonged Heat Wave