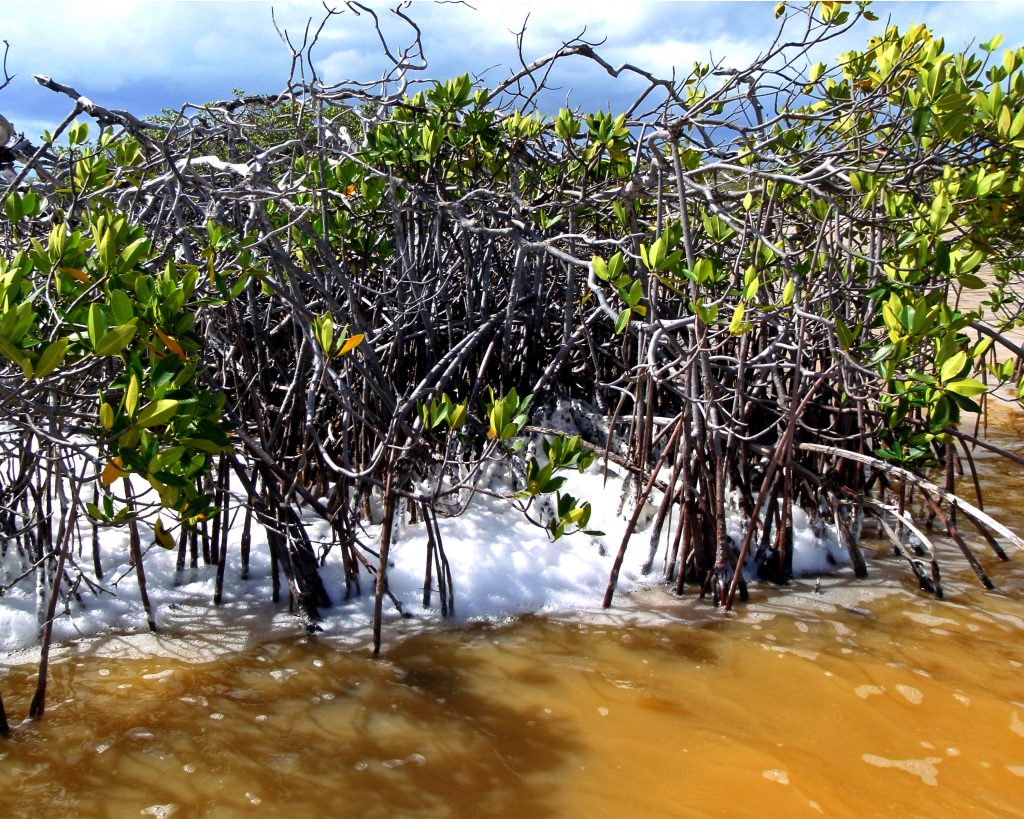 [The body of this article wound up going missing at some point, leaving the posting empty. We apologize for any inconvenience this may have caused. ~Matt]

Microbiologists have discovered what is now known as the world’s largest bacterium, a single-celled organism large enough to be seen with the naked eye, prompting scientists to re-evaluate the world of microorganisms—provided the word “micro” can be applied to a single-celled creature that can grow to three-quarters of an inch long—not only for its astounding size, but also because of its unique internal structure, making it a possible example of a “missing link” in the evolution of complex cells.

This new-found organism, dubbed Thiomargarita magnifica, was discovered growing as hair-like filaments on decaying mangrove leaves in a swamp in the French Antilles, although it wasn’t until five years later that its discoverer, a marine biologist at the University of the French Antilles named Olivier Gros, realized that each of the fibers were actually individual bacterium.

While individual cells of T. magnifica are extremely thin, they can grow up to 2 centimeters (0.79 inches) long, making them not only visible to the naked eye, but also larger than numerous multi-celled organisms, and 5,000 times larger than typical microbes. “When it comes to bacteria, I never say never, but this one for sure is pushing what we thought was the upper limit [of size] by 10-fold,” according to Verena Carvalho, a microbiologist at the University of Massachusetts, Amherst.

But size wasn’t the only surprise T. magnifica had to offer: the bacterium’s internal structure appears to be a cross between simple prokaryotic cells like bacteria and more complex eukaryotes, the type of cells that make up the cellular structure of more complex life forms like plants, animals and fungi. Specifically, the DNA of prokaryotes float freely within the cell’s membrane, and lack organelles like mitochondria; eukaryotes, on the other hand, contain their genetic material in a centralized nucleus, and have organelles that, much like the organs seen in species at the macroscopic level, carry out specialized functions within the cell.

But unlike other species of bacteria, T. magnifica has specialized structures that contain its genetic material, appearing much like a primitive eukaryotic nucleus. These granule-like structures are a new type of organelle the research team are calling “pepins”, simplistic membrane-bound packets containing genetic material that appear to function like a primitive nucleus.

It’s these proto-nuclei pepins that appear to bridge the gap between nuclei-challenged prokaryotes and their more complex eukaryotic counterparts, offering a glimpse into what may be a missing evolutionary link between the two classifications. “Perhaps it’s time to rethink our definition of eukaryote and prokaryote!” exclaims Petra Levin, a microbiologist at Washington University in St. Louis. “It’s a supercool story.”

T. magnifica’s pepins are found throughout the cell’s cytoplasm, the material that typically fills out the interior of a cell. But unlike other cells this cytoplasm doesn’t make up the entirety of T. magnifica’s interior: instead, a large central vacuole filled with water takes up nearly three-quarters of the cell’s volume, pressing the cytoplasm—and the gene-containing pepins—into a thin layer lining the membrane that forms the outer skin of the cell.

It would appear to be this water-filled structure that allows T. magnifica to break the rules that would typically limit the size of regular bacteria: lacking a more complex mechanism to transfer food, water, air and waste in and out of the organism, bacteria rely on the simple diffusion of molecules throughout their bodies, meaning that if an individual cell were too large, the center of the organism would starve from lack of resources. But since all of the “living” material found inside of T. magnifica is pressed into a thin layer near its surface, it can grow larger without having to worry about depriving the center of the organism of resources.

“Separating genetic material from everything else allows more sophisticated control and greater complexity,” according to Monash University microbiologist Chris Greening. “All too often, bacteria are thought of as small, simple, ‘unevolved’ life forms—so-called ‘bags of proteins,’” Greening adds. “But this bacterium shows this couldn’t be much further from the truth.”

Subscribers, to watch the subscriber version of the video, first log in then click on Dreamland Subscriber-Only Video Podcast link.
2022-03-05
Previous Headline News Post: New Insight: Russian “Cognitive Warfare” as a Weapon Against the West
Next Headline News Post: Gravity Itself is Contributing to Glacial Melt in Greenland