Gravity Itself is Contributing to Glacial Melt in Greenland 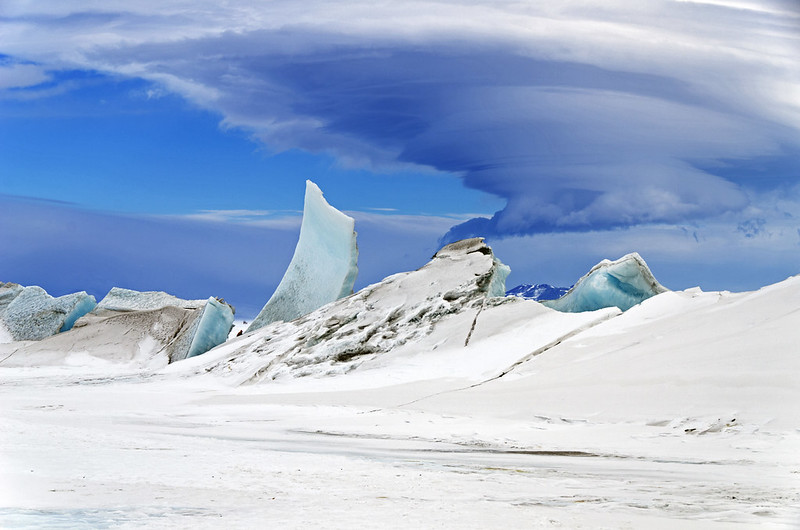 A team of researchers studying the dynamics of meltwater lakes that form on the surface of Greenland’s glaciers has discovered a previously-undiscovered source of heat that is melting the world’s largest island’s ice sheets from the bottom up: the sheer force of the meltwater draining to the bottom of the glacier itself. It turns out that the more than half-mile high drop adds an amount of energy comparable to that of a major hydro-electric dam to the meltwater, raising its temperature even further above freezing by the time it reaches the bottom of the glacier.

“When studying basal melting of ice sheets and glaciers, we look at sources of heat like friction, geothermal energy, latent heat released where water freezes and heat losses into the ice above,” explains University of Cambridge Professor Poul Christoffersen, who led the study. “But what we hadn’t really looked at was the heat generated by the draining meltwater itself. There’s a lot of gravitational energy stored in the water that forms on the surface and when it falls, the energy has to go somewhere.”

With their current focus on the Store Glacier in northwest Greenland, Christoffersen’s team took direct readings of the conditions at the bed of the glacier to measure the rate of melt at the bottom of the ice, and found that some of the melt rates were as high as those found on the surface, despite the surface being exposed to sunlight 24 hours a day during the summer. When the team calculated the amount of meltwater that was falling to the glacier’s base, they found that 82 million cubic meters (2.9 billion cubic feet) of water poured down each day during the summer of 2014, unlocking gravitational energy during the one kilometer (3/5ths of a mile) plummet that rivals what is generated by the world’s largest hydroelectric dam, the Three Gorges Dam in Hubei, China.

This energy imparts itself as thermal energy when it hits rock bottom, where the team found the temperature of the meltwater that pools under the ice sheet to be as high as 0.88°C (33.6°F), despite being buried under a layer of ice more than seven times as deep as the height of the Great Pyramid of Giza; this temperature is a full 1.27°C (2.3°F) above the -0.39°C (31.3°F) melting point of the ice at that depth.

“The borehole observations confirmed that the meltwater heats up when it hits the bed,” Christoffersen explains. “The reason is that the basal drainage system is a lot less efficient than the fractures and conduits that bring the water through the ice.

“The reduced drainage efficiency causes frictional heating within the water itself. When we took this heat source out of our calculations, the theoretical melt rate estimates were a full two orders of magnitude out. The heat generated by the falling water is melting the ice from the bottom up, and the melt rate we are reporting is completely unprecedented.”

Additionally, these numbers only represent what is happening to the Store Glacier itself: when extrapolated to include the nearly one million square kilometers (386,000 square miles) of meltwater that forms across the surface of Greenland’s ice sheets during the summer, the energy unlocked surpasses what is produced by the world’s ten largest hydroelectric power stations combined—a previously-unknown effect that hasn’t been factored into climate models, and one that is likely to increase in the future.

“Given what we are witnessing at the high latitudes in terms of climate change, this form of hydropower could easily double or triple, and we’re still not even including these numbers when we estimate the ice sheet’s contribution to sea level rise,” according to Christoffersen.

Subscribers, to watch the subscriber version of the video, first log in then click on Dreamland Subscriber-Only Video Podcast link.
2022-03-09
Previous Headline News Post: The World’s Largest Bacteria May Be a Single-Celled Missing Link [UPDATE]
Next Headline News Post: Preventing WWIII: Walking the Nuclear Tightrope in the War for Ukraine