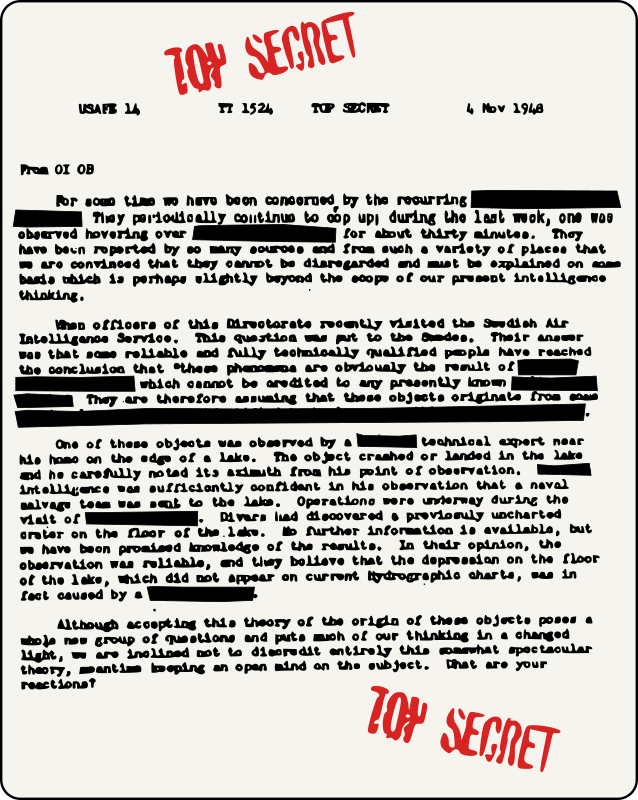 A copy of the classified version of the Pentagon’s Preliminary Assessment: Unidentified Aerial Phenomena has been obtained by The Black Vault’s John Greenwald, following months of pursuing a Mandatory Declassification Review. Although the report released to Greenwald is heavily redacted, the context offered by the previously-unreleased material that it contains offers much more insight into what Congress was briefed on, and what the military does and does not know about the UFO phenomenon.

Initially released on June 25 of last year, the 9-page unclassified version of the report that was made available to the public held little in the way of useful information for the UFO community. This newly-released 17-page report, while still brief, expands on sections available in the public release, including direct references and excerpts from a handful of the 144 individual UAP reports investigated by the UAP Task Force, along with numerous appendices outlining the appearances and capabilities of the various craft that were encountered. Although heavily redacted, the additional material included in the classified copy of the report means that policymakers that received the classified version were given a much more comprehensive view of the UAP situation.

Although much of the information contained in the classified version of the report is obscured, Greenwald says that we “now have a partial glimpse into what is being bantered about in classified material and given to the Senate and other members of the House. And when you digest that you realize that there is much more to the story, that they are getting much more to the story.”

Although it is similar in intent to a Freedom of Information Act (FOIA) request, a Mandatory Declassification Review (MDR) is “a means by which any individual or entity can request any Federal agency to review classified information for declassification,” according to the National Archives. Greenwald filed an MDR under 32 CFR § 1704 less than 24 hours after the landmark report was released; unfortunately, it took nine months and repeated prodding on Greenwald’s part for the ODNI to deliver the classified version of the report to The Black Vault.

While an pervasive culture of secrecy is unhealthy for any society, there can be legitimate reasons for government agencies to keep certain facts under their alphabet-anointed hats; to that end each portion of the report’s redacted information is labeled with a code referring to a subsection in Section 1.4 of Presidential Executive Order 13526 that lists the reason for said information’s exemption from release. In general, these exemptions are designed to keep US military and intelligence capabilities—and potential vulnerabilities—secret, and also to protect the personal information and identities of the individuals involved.

Along with the context provided by the unredacted portions of the report, these references to EO 13526 can also provide clues as to what the hidden portions might hold, and Greenwald offers a comprehensive breakdown of the report’s contents in a March 26 video posted on his The Black Vault Originals YouTube channel.

A few highlights from the new information included in the classified report include:

While some of the redacted portions of the report appear to hide legitimately sensitive data, Greenwald is questioning the validity of numerous redactions made in the copy of the report he received, redactions that obscure information that doesn’t appear to betray potentially sensitive information, such as the section describing the shapes of various UAP, along with other seemingly mundane details. He says he will appeal these seemingly unnecessary redactions; hopefully his efforts will be successful and offer more context to what has already been revealed in the report.

If there is one key takeaway from the release of Congress’s version of Preliminary Assessment: Unidentified Aerial Phenomena, Greenwald says that “the military was not able to peg one foreign adversarial drone or piece of technology or technological platform to any of the UAP that were investigated. In addition they were not able to peg one single case on any classified piece of US technology.

“That, to me, is a fascinating revelation that with the resources behind the US government and the US military they still could not fit the cases into their own breakdown of mundane explanations, of logical explanations. They couldn’t do it. Not once.”