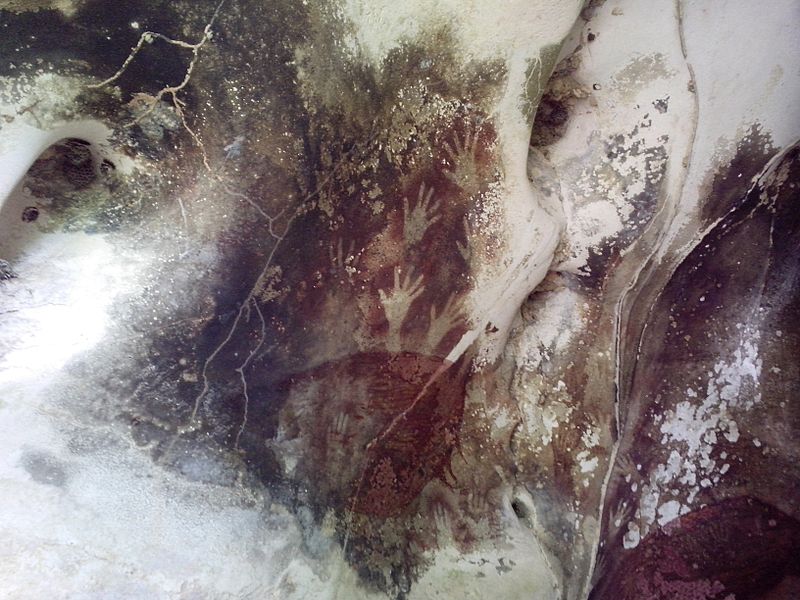 Researchers in Indonesia have found what may be the world’s oldest rock art in a cave on the island of Sulawesi. The scene depicted in the 44,000-year old painting is of a hunting expedition, complete with images of a menagerie of animals being stalked by part-human, part-animal hunters, making the work not only the world’s oldest example of a recorded story, but also the earliest depiction of man-beast hybrids as mythological entities.

During a survey for previously undiscovered rock art on Sulawesi in 2017, researcher Pak Hamrullah discovered a cave in the Pangkep region that would later be designated as Leang Bulu’ Sipong 4, with an entrance located several meters high on a limestone cliff face. Inside was a 4.5-meter (14.75-foot) cave painting depicting a hunting scene: the hunter’s quarry included two Sulawesi warty pigs and four dwarf buffaloes known as anoas.

An analysis of radioactive isotopes extracted from what is known as “cave popcorn”—mineral growths that formed on the paintings after they had been made—revealed that the artwork was 43,900 years old, predating the 40,800-year old red disk painted in the Panel de las Manos in El Castillo, Spain.

“Our dating work shows that this is the world’s oldest dated figurative artwork, an image that resembles the subject matter it is intended to represent,” according to Adam Brumm, an archaeologist at Australia’s Griffith University.

Figurative artwork, something that depicts figures like people and animals, doesn’t start to appear on rock walls until about 35,000 years ago, with artwork previous to this—including the period when the Sulawesi painting was made—typically being of abstract symbols. However, works that depict multiple interacting subjects, like the Sulawesi painting, aren’t thought to have appeared before roughly 20,000 years ago, nearly 24,000 years after our enigmatic artist put red pigment to the Leang Bulu’ Sipong 4 cave wall.

But what may be most intriguing are the hunters depicted in the story, of whom aren’t entirely human, being portrayed as having the beaks and snouts of birds, reptiles and other animals native to Sulawesi, including tails and other animal appendages. Although part-man, part-animal entities—called “therianthropes” by researchers—are found in virtually every modern mythology around the world, the painting in Leang Bulu’ Sipong 4 cave would appear to be the world’s oldest depiction of such hybrid creatures; previously, the oldest-known depiction of a therianthrope was a 40,000-year old carving of a human with a feline head found in Germany.

“In Europe, scholars have long been interested in the oldest known images of therianthropes in prehistoric art, because they are generally accepted to represent the earliest evidence for our ability to conceive of abstract entities that do not exist in the natural world,” Brumm explained. “Depictions of therianthropes are also seen as an indication of early spirituality or religious-like thinking.”

Although the researchers are interpreting the scene as simply the product of the artist’s imagination, stories of shape-shifting shamans turning into animals to aid their tribe’s hunting parties are not uncommon, so instead of this scene depicting some sort of supernatural beings chasing down their prey, it might very well be the story of a hunt that the artist took part in.

Additionally, there are stories originating from the same region of Sulawesi of people crossing into other realms, and being taken by spirits that reportedly dwell there. Did the tribe that made the Leang Bulu’ Sipong 4 painting make use of the strange properties in the area to help them in their hunts?

In their 2017 book, The Super Natural, Whitley Strieber and Jeffrey J. Kripal illustrate how what we traditionally think of as “supernatural”, is simply part of the natural world—albeit a side of reality that is profoundly unfamiliar to the majority of people.

Subscribers, to watch the subscriber version of the video, first log in then click on Dreamland Subscriber-Only Video Podcast link.
2019-12-13
Previous Headline News Post: Plants Make High-Pitched Sounds When Injured or Stressed
Next Headline News Post: Greenland’s Ice Is Melting Nearly Eight Times Faster Than It Was 27 Years Ago