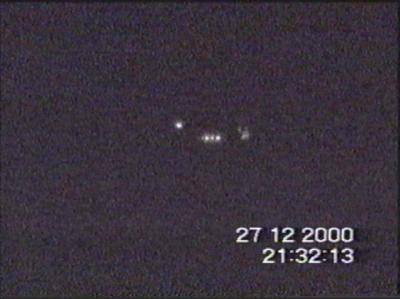 Former Nevada Senator Harry Reid is once again making a case for the US government to renew its studies into the phenomenon of Unidentified Flying Objects. Reid was part of a group that procured funding for the Pentagon’s Advanced Aerospace Threat Identification Program (AATIP), a program that investigated anomalous aerial phenomenon between 2007 and 2012.

“I’ll bet you anything that China is spending money to check this out, I’ll bet you anything that KGB Putin is spending some money checking this out,” Reid said in an interview with KLAS reporter George Knapp. In his report, Knapp says that Reid “dropped hard-edged hints that he knows potential adversaries Russia and China have carried out their own military studies to figure out how UFOs work and how to build their own.”

When asked his opinion on why he thinks these anomalous objects seem to be interested in human affairs, Reid responded “Well, let’s turn that around. Why are we interested in them? Same answer to your question, because we don’t know.”

Reid also commented on the dismissive response from skeptics to the so-called “Tic-Tac UFO” encountered by the USS Nimitz carrier group in 2004, objects that were tracked by radar and recorded by the FLIR (Forward-Looking Infrared) equipment on board the aircraft that intercepted them/ Reid explained that the inability to explain the phenomenon prompted authorities to simply ignore the subject.

“This has been going on a long time. These sightings are said to have been set off by a rocket in California or something,” Reid explains. “People do not want, who are in positions of responsibility, whether it’s the Pentagon or whatever it might be, they don’t want to have to try and explain something that many times is not explainable.”

“We, as part of this program looked at some cases that were really good from Brazil,” Puthoff explains during a 2018 presentation in Las Vegas. “In 1977, 78, it was like Close Encounters of the Third Kind, a thousand pages of documents all done by the Brazilian Air Force investigative team, 500 photographs, 15 hours of motion film, a lot of medical injuries when people encountered these craft at close range.”

Reid also says he only had a chance to read a portion of the reports and papers produced by AAWSAP (Advanced Aerospace Weapon System Applications Program, the original name for the AATIP program), and that he wanted to transition the study into a special access program (SAP), so that he and his staff could gain access to information and materials produced by other classified projects that have investigated the UFO phenomenon, specifically “other programs that have been done and information they have, including different pieces of evidence,” according to Reid.

When asked if he knew what that material entailed, Reid replied “No, I’ve just heard rumors and I’m not going to get into rumors, but that’s why I wanted special access to go there, and if I couldn’t go there, to have my staff go look at it.”

Subscribers, to watch the subscriber version of the video, first log in then click on Dreamland Subscriber-Only Video Podcast link.
2019-03-05
Previous Headline News Post: Huge Storm Complex Crossing North American Continent
Next Headline News Post: For the First Time Ever, a Category-5 Storm Formed in the Northern Hemisphere in February