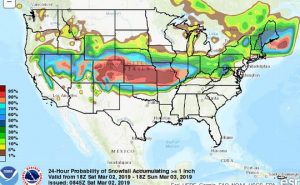 A massive storm complex is crossing the northern and central tier of states in the US and the southern part of Canada. The storms are bringing rain, snow, wind and colder temperatures to the region, and may generate tornadoes along their southern edge, which will be in the southeastern US.

While not unprecedented, this system is unusually powerful. It has been generated by cold air being pumped down from the arctic by a deep looping jet stream. This has happened in part because the Gulf Stream is no longer strong enough to hold cold air in the arctic and also because high arctic temperatures are unseasonably warm, pushing the cold air southward.

Subscribers, to watch the subscriber version of the video, first log in then click on Dreamland Subscriber-Only Video Podcast link.
2019-03-02
Previous Headline News Post: Greetings from the Far Side: Chang’e 4 Starts Farming on the Moon, Sends Back Pictures
Next Headline News Post: Senator Reid says the US needs to Investigate UFOs to Keep Up with China & Russia