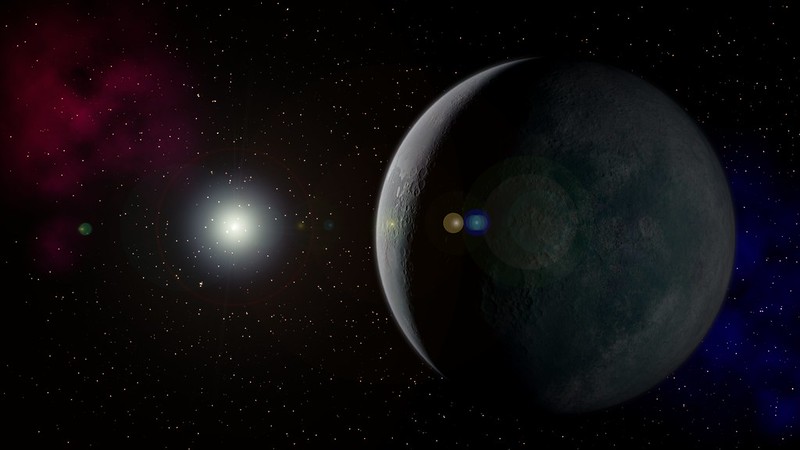 New computer modeling of the early Solar System has found that there were probably more planets orbiting the Sun billions of years ago, but were either destroyed in planetary collisions, lost to the depths of interstellar space as rogue planets, or possibly still part of our cosmic family, a dark sibling—or siblings—lurking in the far reaches of space past the orbit of Neptune.

This planetary modeling, conducted by planetary scientists Brett Gladman of the University of British Columbia and Kathryn Volk of the University of Arizona, found that the evolution of the Solar System doesn’t work if only the known planetary bodies that exist today are used in the simulation; the model only falls into place if an extra planet, somewhere between the mass of Earth and Mars, are added in to the primordial mix. Presumably, these additional members to the Solar family have been lost early in the Solar System’s evolution—at least lost to our understanding.

Basically, the modeling points out an inconsistency in the pattern of how the known planets are arranged. To illustrate, the objects in the Solar System can be categorized into three main groups:

But there’s a problem with this arrangement: “It seems unlikely that Nature created four giant planet cores, but then nothing else larger than dwarf planets in the outer Solar System,” according to Gladman and Volk’s review paper. Indeed, the rocky cores that are at the center of the two gas giants, Jupiter and Saturn, would be considered super-earths if their layers of hydrogen and helium were stripped away, with each core being roughly 18 and 17 times the Earth’s mass, respectively; ice giants Uranus and Neptune have cores with masses more in-line with that of Earth’s, but there is a sudden drop off in the mass of the next significant body, being Pluto’s mere 0.218% of Earth’s mass.

Gladman and Volk’s evolutionary models were only successful in producing virtual systems similar to what we see today when at least one extra planet—and typically more than one—that was between the mass of Earth and Mars was introduced into the outer Solar System’s early phases; without these extra bodies, the System doesn’t evolve properly. There are many theories positing that as the planets grew in mass during Sol’s early years they first migrated closer to, and then later further away from the Sun, with some being destroyed in inevitable collisions, and the survivors either being flung off into interstellar space as rogue planets, or possibly even retreating to the dark outer edge of the Solar System, still waiting to be discovered.

Many of the smaller known trans-Neptunian objects that circle the fringe of the Solar System appear to have formed much closer to the Sun, and were later consigned to the deep after they were tossed about during the primeval dance of the planets, and perhaps this is where astronomers should look for missing planets such as the ones that should have been present in the early Solar System.

“Our simulations found that in about half of the cases, all of the Mars-scale planets in the outer Solar System were ejected into interstellar space,” explains astrophysicist Scott Tremaine, with the Institute for Advanced Study, who was not involved with Gladman and Volk’s study. “But in the remaining half, one ‘rogue’ planet was left in an orbit similar to that of the detached population of Kuiper Belt objects.”

Although the proposed mass of the planets are different, this extra planet wouldn’t be the hypothetical “Planet Nine” first proposed by Caltech astronomers Konstantin Batygin and Michael Brown in 2016, as it would lack the large mass—somewhere between 5 and 10 times that of Earth—needed to explain the wildly elliptical orbits of the far-flung trans-Neptunian objects.

Subscribers, to watch the subscriber version of the video, first log in then click on Dreamland Subscriber-Only Video Podcast link.
2022-02-16
Previous Headline News Post: With the Launch of New Research Groups, Will 2022 Be a Turning Point for UFO Studies?
Next Headline News Post: Western North America is Suffering from the Worst Megadrought in 1,200 Years