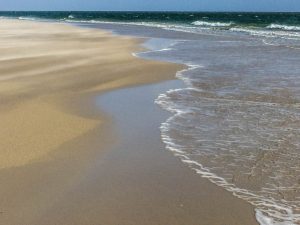 A new study is warning that it is now “inevitable” that the world will face nearly a foot in sea level rise from the melting of the Greenland ice sheet alone, even if human-based carbon emissions were to halt immediately. The study authors point out that their figure is a conservative one, as it only takes into account the amount of excess melt experienced by Greenland over the past two decades, and doesn’t factor in any additional heating that is likely to occur in the future.

While most scientific estimates use computer models to predict the rate of ice loss the planet may face in the future, this study used satellite measurements of ice losses from Greenland gathered from 2000 to 2019 to build a more accurate estimate of how sea levels will be impacted by meltwater from the island’s massive ice sheets.

They found that the current imbalance in the Greenland ice sheet that has resulted from warming over the last two decades has committed the world’s oceans to a minimum of 27.4 centimeters (10.8 inches) of sea level rise “regardless of twenty-first-century climate pathways,” according to the study text.

“It is a very conservative rock-bottom minimum,” explains study lead Professor Jason Box from the National Geological Survey of Denmark and Greenland (GEUS). “Realistically, we will see this figure more than double within this century.”

This figure is considered to be the bare minimum of sea level rise because the study only takes into account the measured amount of melt due to global warming that has already been measured, and doesn’t forecast the amount of additional heating that would occur if greenhouse gases continue to accumulate in the atmosphere—a variable that is difficult to predict considering the unpredictability of how our civilization will respond to the imminent climate crisis.

“The minimum of 27cm is the sea-level rise deficit that we have accrued to date and it’s going to get paid out, no matter what we do going forward,” according to study co-author Dr. William Colgan, a climatologist with GEUS. “Whether it’s coming in 100 years or 150 years, it’s coming. And the sea-level rise we are committed to is growing at present, because of the climate trajectory we’re on.”

While this 27.4 centimeter figure is the minimum amount of sea level rise we can expect to face, the study offers a possible outcome from the opposite end of the spectrum: 2012 was a record year for ice melt in Greenland, with the island shedding 532 billion metric tons of ice; if melt events such as this become the norm, “then the committed loss grows to 78 centimeters (30.7 inches), which is staggering, and the fact that we’re already flickering into that range [of ice loss] is shocking,” Colgan warns. “But the difference between 78 centimeters and 27 centimeters highlights the [difference] that can be made through implementing the Paris agreement. There is still a lot of room to minimize the damage.”

It’s also important to remember that this figure is just the potential contribution of the Greenland ice sheet alone: the much more massive ice cap that covers East Antarctica would raise sea levels by 52 meters (171 feet) if it were to melt entirely; and water warms it expands, with the water already present—estimated to have already absorbed approximately 93 percent of the excess heat resulting from climate change—adding to sea level rise.

Although not involved in the study, the University of Exeter’s Professor Gail Whiteman remarks that “the results of this new study are hard to ignore for all business leaders and politicians concerned about the future of humanity. It is bad news for the nearly 600 million people that live in coastal zones worldwide. As sea levels rise, they will be increasingly vulnerable, and it threatens approximately $1 trillion of global wealth.”

Subscribers, to watch the subscriber version of the video, first log in then click on Dreamland Subscriber-Only Video Podcast link.
2022-09-01
Previous Headline News Post: Congress Admits That Some UAP Are Not ‘Man-made’, and Are a National Security Threat That Is ‘Expanding Exponentially’
Next Headline News Post: A Memory Material Has Been Discovered That May Revolutionize Computers