Modern Autoimmune Disorders May be Genetically Linked to Bubonic Plague 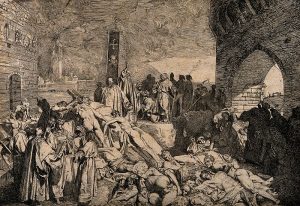 An international team of researchers has identified genetic traits that appear to have enabled individuals to survive the Black Death, a bubonic plague pandemic that swept across northern Africa and Eurasia in the mid-fourteenth century. Although these genetic variations were beneficial in surviving a plague that killed nearly half of the population of Europe, these same genetic traits are also associated with an increased susceptibility to certain autoimmune diseases that affect many individuals today.

The Black Death was a pandemic that occurred between 1346 and 1353 that killed an estimated 75 to 200 million people across Western Eurasia and North Africa; the disease was caused by a bacterium called Yersinia pestis; when spread through flea bites the disease takes the form of bubonic plague, and when spread via human-to-human contact the pneumonic form of the disease results.

The study was conducted on more than 500 genetic samples collected from the remains of individuals that died just before, during, and after the period that the Black Death occurred; this comparison allowed the researchers to identify genetic markers that were prevalent amongst the survivors of Y. pestis infections, suggesting that these genetic variations may have played a role in their recovery.

One of these genetic variations the study identified as prevalent amongst the survivors was a variation in the gene called endoplasmic reticulum aminopeptidase 2, or ERAP2, a gene that affects how our cells present antigens for use by the cells that are involved in the functioning of our immune system; the study found that if an individual had two “good” variations on ERAP2, a trait likely to provide a more robust immune response, their likelihood of survival was 40 percent higher than someone who lacked this beneficial variant.

Unfortunately, ERAP2 is also associated with an increased risk of developing Crohn’s disease, an inflammatory bowel disease caused at least in part by an autoimmune response that causes abdominal pain, digestive problems and a greater risk of colon and small bowel cancer, amongst other complications.

“These genes are underbalancing selection—what provided tremendous protection during hundreds of years of plague epidemics has turned out to be autoimmune-related now,” according to study co-author Hendrik Poinar, a professor of anthropology with Canada’s McMaster University. “A hyperactive immune system may have been great in the past but in the environment today it might not be as helpful.”