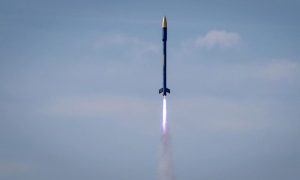 The United States’ largest aerospace organization is launching an investigation into unidentified aerial phenomena, an effort paralleling numerous governmental, academic and civilian investigations into the subject of UFOs.

Named the Unidentified Aerospace Phenomena Community of Interest (UAPCI), this new investigative body is being formed by the American Institute of Aeronautics and Astronautics (AIAA), a professional society in the US that boasts over 30,000 members employed by over 100 major agencies and corporations active in the aerospace industry, such as Boeing, Lockheed Martin, SpaceX and NASA.

“We’re stepping in a new territory,” remarked Ryan Graves, a former Navy fighter pilot and defense contractor who is co-chairing the UAPCI along with NASA planetary scientist Ravi Kopparapu. Graves has a personal interest in investigating UAP, being one of the Navy pilots that encountered an unknown object that paced his F/A-18 Super Hornet off of the Atlantic Coast in 2014.

UAPCI’s website states that its mission is to “improve aviation safety by enhancing scientific knowledge of, and mitigating barriers to, the study of Unidentified Aerospace Phenomena (UAP),” with a focus on the potential flight safety issues that UAP might present to conventional aircraft; Graves cited the 11 reports of near misses with UAP since 2019, cases that involved unknown objects passing within 500 feet of an aircraft. Graves himself reported that one of his fellow flight crew members told him “I almost hit one of those things,” while describing a 2014 encounter.

“It’s almost like seeing a bullet go past you as a pilot, right?” Graves said. “People have no idea what’s going on. It is going to frighten people.”

“This topic is not for everyone,” Graves added, addressing the still-present stigma surrounding the subject of UFOs. “It is not about forcing people to look into this if they are not ready yet. People have to come to terms with it.” Regardless, Graves said that scores of AIAA members have volunteered to contribute to the UAPCI, all of them “super excited about what we are doing.”

“There is more than we can handle right now,” he remarked, regarding AIAA members’ interest in the investigation, including members that range in experience from “people that have 30-plus years at NASA” to “nontraditional members from the tech community.”

“We have to take bits from a lot of different things and combine them together in new ways to get the answers,” he added.

The involvement of an organization with the prestige of the AIAA is considered to be a turning point by some traditional UFO investigators.

“We were wallowing in the fringe realm,” explains David Marler, executive director of the newly-formed National UFO Historical Records Center in Albuquerque, NM. “We need people much smarter than ourselves, and from specific disciplines, to provide credibility and layers of expertise to look at the data.”

The UAPCI expects to have a plan regarding their data collection methodologies ready by the end of the year, and will release a technical report on those methods and technologies by the end of 2023.