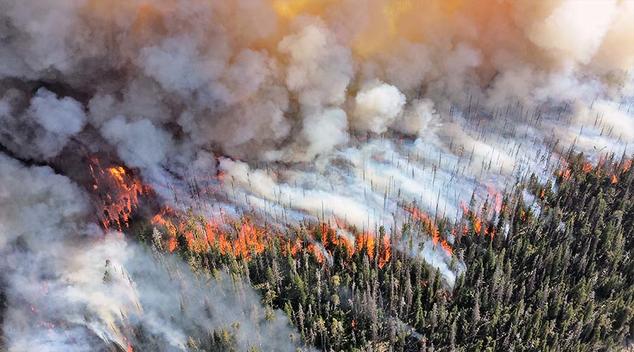 The massive wildfires currently burning in Canada and the US are intense enough to generate their own weather systems, cycles of air that soar high into the atmosphere that generate their own lightning storms, sparking new fires on the ground below, then falling in powerful downdrafts that feed fresh air to the fires below.

Appearing in the form of what are known as pyrocumulus clouds, these massive fire-generated storms occur when intense sources of heat, such as volcanic eruptions or large wildfires, cause intense convection currents to carry the smoke, ash and vaporized water from the fire high into the atmosphere, where water vapor from both the updraft and what is already present in the air condenses on the particles of smoke, forming a dense, billowy cumulus cloud. Large pyrocumulus clouds, called pyrocumulonimbus clouds, can even generate their own lightning storms, a major hazard that can spark new fires on the ground.

The tumultuous updrafts that produce pyrocumulus clouds can reach heights of up to 30,000 feet—cruising altitude for airliners—but the even larger pyrocumulonimbus clouds can reportedly tower to altitudes of 45,000 feet, and numerous examples of these soaring columns have been generated by the massive wildfires in Canada and Oregon this season.

Called cumulonimbus flammagenitus in meteorological circles, numerous pyrocumulonimbus firestorms have been tracked in Canada since May of this year, with the first one forming in Manitoba. After breaking successive all-time heat records in Canada, the village of Lytton saw two such firestorms in late June, a conflagration that destroyed 90 percent of the town.

“It was probably the single largest pyrocumulonimbus storm of the year so far,” according to Michael Fromm, a meteorologist with the United States Naval Research Laboratory. “In fact, we’re still tracking the smoke plume from that storm as it’s travelling around the world and it’s about to kind of come full circle back over the U.S. and Canada.”

The powerful convection currents that generate pyrocumulus and pyrocumulonimbus clouds create a cycle of updrafts and downdrafts that generate high winds on the ground, providing a ready source of fresh oxygen that feeds the flames. “It’s just like if you have a stove and you have a small burner — you’re not going to get as much of a fast boil in your pot as if you had a really hot, intense burner,” Fromm describes. “So, the big, large fire just makes it that much easier for the air to be completely upset. And then if you do form a cloud, then that generates even more buoyancy and that feeds back down to the fire.”

These storms typically form in the late afternoon and run between two and five hours, and die down only when the air cools enough to disrupt the storm’s cycle, but not before generating powerful lightning storms: in a 15-hour period between 3:00 PM on June 30 and 6:00 AM on July 1, pyrocumulonimbus storms that formed over the wildfires in British Columbia and northwestern Alberta produced 710,117 lightning bursts, with 112,803 of these recorded as cloud-to-ground strikes.

Oregon’s massive Bootleg wildfire, now having consumed over 414,000 acres, has also been a prolific generator for these massive clouds, with 6-mile-high (9.7 kilometer) cloud columns being spotted by observers over 100 miles (161 kilometers) away, for four days straight. As with the pyrocumulus storms in Canada, the fires in Oregon are creating their own weather systems, exacerbating the fire hazards firefighting crews face.

“The fire is so large and generating so much energy and extreme heat that it’s changing the weather,” explains Marcus Kauffman, a spokesman for the Oregon forestry department. “Normally the weather predicts what the fire will do. In this case, the fire is predicting what the weather will do.”

Canada and the US aren’t the only regions being ravaged by wildfires, with 3.7 million acres in north-east Siberia having burned, with officials describing this summer’s weather conditions as the driest in the past 150 years, the latest in a half-decade of hot summers that have created tinderbox conditions across the region.

Subscribers, to watch the subscriber version of the video, first log in then click on Dreamland Subscriber-Only Video Podcast link.
2021-07-31
Previous Headline News Post: 15,000-Year-Old Viruses Have Been Discovered Preserved in a Tibetan Glacier
Next Headline News Post: ‘The War Has Changed’: Coronavirus’ Delta Variant Is as Contagious as Chickenpox