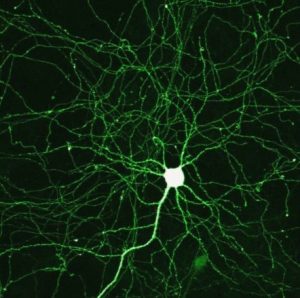 Although this might come across as a joke about how little brainpower it takes to play some video games, a biological research company in Australia has taught a dish of lab-grown neurons to play a version of the classic 1970s video game Pong in a display of what the researchers describe as “intelligent and sentient behavior.”

This game-playing collection of lab-grown brain cells is part of a hybrid electronic-biological system called DishBrain, a “wetware” artificial intelligence unit being developed by Australia-based Cortical Labs. The DishBrain unit used in this experiment involved a cluster of 800,000 neurons that were connected to a computer programmed to play the 1972 video game Pong, a simple table tennis–themed two-player game that involves bouncing a ball between two paddles.

The game computer fed electrical signals to the colony of neurons that represented the direction of the simulated ball and its position relative to the game’s paddle; for simplicity only one paddle was used—remember, this is an artificial brain with only four-fifths of the number of neurons found in the common cockroach, and has had no formal esports training.

When stimulated by the incoming electrical signals the neurons started producing electrical activity of their own, learning how to play the game in less than five minutes through real-time interaction with this simulated, albeit extremely simple, virtual world; shortly after this the cells began expending less energy to interact with their newfound pastime—DishBrain’s training was complete, and it was working toward winning the game.

That isn’t to say that DishBrain was very good at playing Pong—it apparently missed the ball fairly often—but its success rate was higher that what would be considered to be random chance, and is remarkable considering that it is simply a well-organized cluster of neurons that has no idea that it’s playing a game to begin with, let alone why it’s playing said game.

Although the idea that a cluster of neurons an order of magnitude smaller than what is found in the nervous system of a small lizard could be considered sentient seems far-fetched, the concept of “sentience” is defined by the Merriam-Webster online dictionary as “feeling or sensation as distinguished from perception and thought;” strictly speaking, DishBrain’s neurons were being programmed by an incoming electrical stimulus, and responding to that simulated sensation accordingly.

“We could find no better term to describe the device,” explains Dr. Brett Kagan, Cortical Labs’ Chief Scientific Officer. “It is able to take in information from an external source, process it and then respond to it in real time.”

Cortical Labs’ goal is to develop a marketable synthetic biological hybrid computer chip that will be far better suited to generating artificial general intelligence (AGI)—AI that can be taught to do a wide variety of activities, as opposed to the extremely specialized AI that is being developed on classical computer architecture—using the cell-sized microchips that 500 million years of evolution has provided us with; however, the benefits of experiments such as this go beyond developing a (literally) smarter computer, such as research into Alzheimer’s disease; on a lighter note, Kagan’s team also plans on getting DishBrain drunk to study how playing “beer pong” affects the system’s neurology.

“When people look at tissues in a dish, at the moment they are seeing if there is activity or no activity,” Kagan says. “But the purpose of brain cells is to process information in real time. Tapping into their true function unlocks so many more research areas that can be explored in a comprehensive way.”

Subscribers, to watch the subscriber version of the video, first log in then click on Dreamland Subscriber-Only Video Podcast link.
2022-10-18
Previous Headline News Post: Quantum Entanglement Has Been Observed in a Macroscopic Object
Next Headline News Post: ‘The Silver Bullet is Coming’: Protections Expected to Shield UAP Whistleblowers in Upcoming Hearings