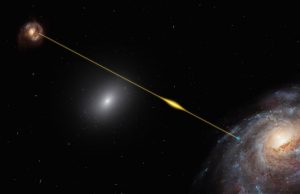 Radio astronomers in China have observed what they believe to be an artificial radio signal from another star system, a system that is home to an exoplanet with characteristics extremely similar to that of the Earth.

The research team that made the discovery included researchers from Beijing Normal University, the National Astronomical Observatory of the Chinese Academy of Sciences and the University of California. The team discovered the signal in data collected in 2019 by the Five-hundred-meter Aperture Spherical Telescope (FAST, nicknamed Tianyan (“Sky Eye”), located in China’s Guizhou province. The team focused on 33 systems with known exoplanets, with 29 of these systems having planets that reside in their respective habitable zones, where the temperature would be just right for liquid water to exist on a planet’s surface. Five of these planets are aligned within what is called the Earth transit zone, meaning that a technological culture in one of those systems, provided they have the capabilities, can see the Earth as it passes in front of our Sun, and from that determine that our planet has a habitable atmosphere, making us a potential candidate for contact.

Although this is not the first signal of interest found by the FAST observatory, the “suspicious signal” that was recorded was of particular interest to the researchers: the signal came from the direction of a red dwarf star in the constellation Lyra designated Kepler-438; this system’s only confirmed exoplanet.  Located in that star’s “Goldilocks zone”, Kepler-438b is a planet that, at just 12 percent larger than the Earth is a strong candidate for conditions favorable to Earth-like lifeforms.

The 1140.604 MHz signal that the team found persisted throughout the entire 20 minutes that FAST’s antenna was focused on the system, and was found to be a narrowband transmission, meaning it consisted of a tight set of frequencies; it was this attribute that caught the researchers’ attention, since no known natural astrophysical process can produce such transmissions, meaning that regardless of where it originated, it was likely artificial in origin.

Although the telescope’s designers—and Guizhou’s provincial government—went to great lengths to ensure that no terrestrial signals would interfere with FAST’s observations, there is the possibility that this signal came from a more Earthy source.

“The possibility that the suspicious signal is some kind of radio interference is also very high, and it needs to be further confirmed and ruled out. This may be a long process,” cautions Professor Zhang Tongjie, chief scientist for Beijing Normal University’s China Extraterrestrial Civilization Research Group. Aside from having relocated over 9,000 residents from the area surrounding the telescope, the project also analyzes signal aspects such as frequency drift and polarization to help eliminate the potential for mistaking a local broadcast from a truly alien transmission. The team was also able to exclude possible interference from nearby aircraft, and that “no satellite or deep-space probe entered the main lobe of beam 1 during the observation,” according to the study paper’s text.

The skepticism regarding this signal’s possible extraterrestrial origin was voiced by study co-author and SETI researcher at the University of California Dan Werthimer, who believes the transmission was just simply radio-frequency pollution originating here on Earth.

Regardless, a reinvestigation of Kepler-438b will be made by the FAST observatory, to see if the signal can still be heard. “China Sky Eye will repeat the observation of suspicious signals that have been discovered to further identify and detect new signals.” Zhang said. “We look forward to China Sky Eye being the first to discover and confirm the existence of extraterrestrial civilizations.”

Subscribers, to watch the subscriber version of the video, first log in then click on Dreamland Subscriber-Only Video Podcast link.
2022-06-20
Previous Headline News Post: A Mirror Universe That Balances Our Own May Exist
Next Headline News Post: High-powered Lasers Could Cut the Half-life of Nuclear Waste From “A Million Years to 30 Minutes”