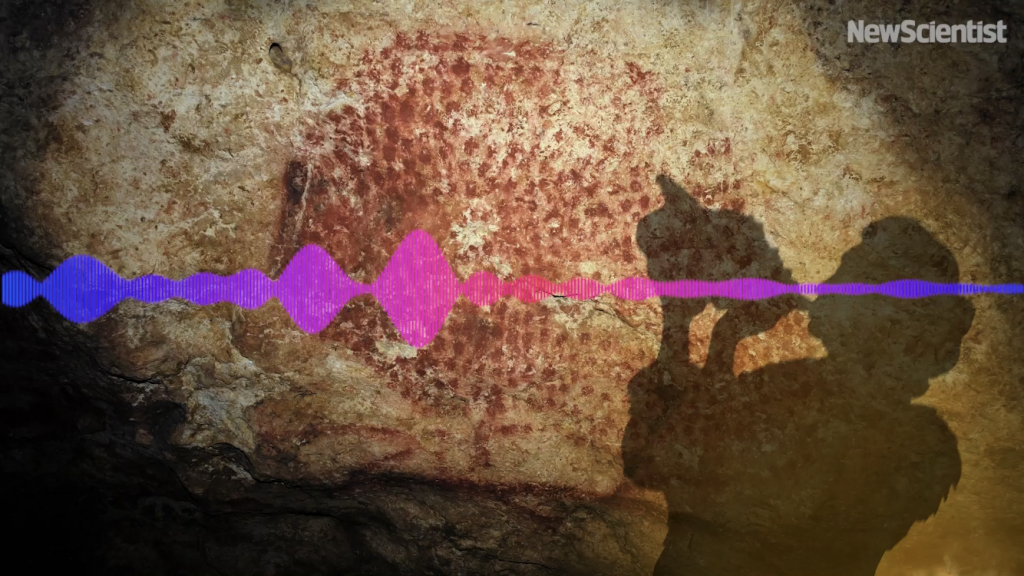 Researchers in France have discovered that an 18,000-year-old conch shell that was found in a cave used by the Magdalenian people of the late Upper Paleolithic was modified by someone to be used as a musical instrument. To test their theory, the researchers tried playing the ancient instrument, and found that it still produced distinctive musical notes.

The conch, originally assumed to be a ceremonial drinking cup, has sat in a collection in France’s University of Toulouse since its discovery in Marsoulas Cave in 1931. Decorated with fingerprint-shaped ochre red markings, the shell, originally belonging to a large sea snail of the species Charonia lampas that probably lived on the coast of what is now France or Spain, has a hole in the pointed tip, or apex, which was assumed to have been the result of the point having broken off at some point in the artifact’s history.

But a new examination that involved a computed tomography (CT) scan and imaging with a medical camera revealed evidence that the narrow hole was deliberately drilled into the shell to convert the mollusk’s former home into a musical instrument.

“We are pretty sure that this shell was transformed by human action, on the contrary to what was first published in the 1930s,” said Gilles Tosello, an archaeologist with the University of Toulouse. Tosello and his team were investigating artifacts and cave art found in Marsoulas cave in the Pyrenees Mountains when they conducted their re-examination of the conch shell found there.

“The broken part of the apex is very narrow, and the hole inside is perfectly round with a regular edge,” Tosello explained. His team believes that the hole in the apex was drilled in a way to accommodate a mouthpiece, perhaps made from a hollow piece of bone, to protect the lips of whoever was playing the instrument. There are also smears of an unidentified brown organic residue on the shell that may have been used as an adhesive to fix such a mouthpiece in place.

When played by a professional horn player, the conch is capable of producing three notes, corresponding roughly to C, D and C sharp (256 Hz, 285 Hz and 265 Hz, respectively). There was some concern that physically playing the conch might cause damage to it, but the ancient instrument appeared to be none the worse for wear after playing. A recording of the three-note recital can be heard in a video in New Scientist’s article on the subject.

Although this ancient conch isn’t the oldest known musical instrument—that distinction falls to a 35,000-year-old bone flute—the location of the shell’s discovery points to its potential importance to its owner, if not for the community they belonged to as a whole, as Marsoulas Cave is nearly 170 kilometers (100 miles) from the nearest coast (and even further 18,000 years ago, when sea levels were much lower), meaning the resonant artifact had traveled some way to find its eventual home in southern France.