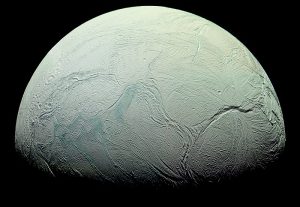 A new analysis of the data from the Cassini space probe that explored the Saturn system has revealed that the impressively-ringed planet’s moon Enceladus may have a substantial amount of phosphorus mixed into its subsurface ocean, meaning that the icy moon appears to be home to all six elements required for the formation of life.

“While the bio-essential element phosphorus has yet to be identified directly, our team discovered evidence for its availability in the ocean beneath the moon’s icy crust,” according to study co-author Christopher Glein, a senior research scientist at the Southwest Research Institute in San Antonio.

While it was exploring the space above Enceladus, Cassini passed through the massive plumes of water thrown into orbit by geysers erupting from the “tiger stripes” that streak across the icy moon’s surface; in them the space probe found ammonia, carbon, methane, nitrogen and oxygen in the samples collected, but phosphorus was conspicuously absent, and without phosphorus added into the mix the emergence of life in Enceladus’s deep oceans would be unlikely, if not impossible.

Phosphorus is crucial to the formation of phosphate compounds called nucleotides, organic molecules that form the backbone of our genetic code; the element is also part of the building blocks of our cells, and is part of the makeup of adenosine triphosphate, or ATP, a compound responsible for transporting metabolic energy throughout the body. Between its contribution to our DNA and its role in a host of other biological processes, without phosphorus life as we know it is impossible.

Previous modeling conducted at Harvard University suggested that, when combined with the moon’s hydrothermal activity, Enceleadus’s oceans may be too alkaline to have held phosphorus-based compounds for very long after the formation of the Solar System. “Phosphorus may be entirely removed from the subsurface ocean world in a very short timescale compared to the age of the solar system—millions of years,” according to that study’s lead author Manasvi Lingam, an astrophysicist at Harvard.

But this new study, led by University of Science and Technology of China senior research scientist Jihua Hao, illustrates that Enceladus’s alkaline ocean may actually have the opposite effect, with a type of phosphate called an orthophosphate being dissolved from the moon’s rocky core into the water by bicarbonates, with the crucial compounds rapidly accumulating over a span of only tens of thousands of years.

“The underlying geochemistry has an elegant simplicity that makes the presence of dissolved phosphorus inevitable, reaching levels close to, or even higher than, those in modern seawater [on Earth],” explains Glein. “What this means for astrobiology is that we can be more confident than before that the ocean of Enceladus is habitable.”

High concentrations of phosphates may not only enable the potential formation of life in the right environment, it may also have a beneficial effect on the evolution of those life forms, as it is theorized that the sudden emergence of large numbers of complex life forms during the Cambrian Explosion 540 million years ago may have been prompted by large amounts of phosphorus being scraped into Earth’s oceans by the massive glaciers that encompassed the planet during its “snowball Earth” phase.

Although this discovery opens the door for the potential formation of life on Saturn’s distant moon we can’t be sure if any of these phosphate compounds are actually present in Enceladus’s global ocean—let alone any lifeforms that may have evolved from that geochemistry—until an exploration mission is sent there.

“We need to get back to Enceladus to see if a habitable ocean is actually inhabited,” remarked Glein.

Subscribers, to watch the subscriber version of the video, first log in then click on Dreamland Subscriber-Only Video Podcast link.
2022-10-10
Previous Headline News Post: Using Puppy-dog Eyes To Decode How Dogs See the World
Next Headline News Post: Nuclear Ignition Has Been Confirmed in a Record-breaking Fusion Experiment