Nuclear Ignition Has Been Confirmed in a Record-breaking Fusion Experiment 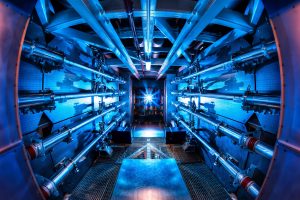 On August 8, 2021, deep within the National Ignition Facility (NIF) in Livermore, California, a capsule of heavy hydrogen isotopes underwent nuclear fusion after being ignited by 1.92 million joules of laser energy, the first time this has been achieved in fusion research. This experiment in harnessing the power of the Sun produced eight times more energy than in previous experiments, a major step in achieving a self-sustaining controlled fusion reaction.

Although the outcome of this experiment didn’t result in what the experiment’s research paper refers to as “scientific breakeven”—a scenario where the energy given off by the ignited plasma equals the amount of energy used to kickstart the fusion process to begin with—the tiny 2.26 mm deuterium fuel capsule produced 1.37 megajoules of energy, more than 70 percent of the 1.92 megajoules of laser power used to implode the target (a major step in achieving that “breakeven” threshold) and a yield eight times greater than another record-breaking experiment conducted at NIF earlier in 2021.

“The record shot was a major scientific advance in fusion research, which establishes that fusion ignition in the lab is possible at NIF,” according to Omar Hurricane, the chief scientist for Lawrence Livermore National Laboratory’s (LLNL) inertial confinement fusion program. “Achieving the conditions needed for ignition has been a long-standing goal for all inertial confinement fusion research and opens access to a new experimental regime” where the energy produced can finally overcome the factors that cause unwanted cooling in the ignited fuel.

As the old joke goes, nuclear fusion is always 20 years away, but the promise of an abundant energy source that produces no carbon emissions or long-lived toxic waste is considered too good to simply pass up. This promise is so appealing that one of the major resources being sought after as part of the new push to colonize the Moon is helium-3, considered to be the ideal fusion fuel.

Subscribers, to watch the subscriber version of the video, first log in then click on Dreamland Subscriber-Only Video Podcast link.
2022-10-12
Previous Headline News Post: Enceladus May Be Home to All Six Elements Crucial for the Formation of Life
Next Headline News Post: Quantum Entanglement Has Been Observed in a Macroscopic Object