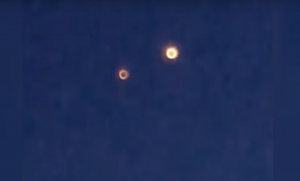 Like its counterparts in the west, the Chinese military has its own task force dedicated to tracking UFO encounters, the reports of which are numerous enough for the group’s analysts to use AI to sort through the data to determine which sightings are mundane occurrences, and which are genuine unknowns.

Although the Chinese public refers to the phenomenon as UFOs, China’s People’s Liberation Army (PLA) uses the term “unidentified air conditions” (UAC), in the same way that the US military has coined the label “unidentified aerial phenomena”, and also like its western counterpart the task force, operating out of the PLA’s Air Force Early Warning Academy, looks for potential unidentified threats to China’s airspace.

“The frequent occurrence of unidentified air conditions in recent years… brings severe challenges to air defense security of our country,” explained Chen Li, a Wuhan-based researcher with the AFEWA, in a 2019 report to a conference of senior information technology scientists. The increased frequency of sightings has made the use of artificial intelligence necessary in their analysis of the data.

“One advantage of AI is that it can ‘think outside the box’ — checking crumbs of information scattered across many datasets created at different times and locations, and drawing links unseen by human eyes — to help determine whether sightings were caused by a hostile country, amateur aviation enthusiasts, nature, or ‘other reasons,’” Chen said in an interview with the South China Morning Post.

The second tier is handled by the PLA’s regional military command, where a preliminary analysis of individual reports are conducted, before transferring them to a central national database. It’s there that the sightings are assigned a “threat index” aided by the task force’s machine learning algorithms, based on the object’s behavior, frequency of occurrence, aerodynamic design, radioactivity, possible make and materials, and other attributes.

An unclassified report on the UFO phenomenon from the Pentagon’s Unidentified Aerial Phenomena Task Force is due to be delivered to the Intelligence Committee by the end of June, and is intended to inform lawmakers of what the military and intelligence communities know about unidentified aerial phenomena.

The UFO depicted here was imaged in China in 2018. It is similar to UFOs imaged elsewhere in the world. To see more of this type of UFO, click here.