Back to the Drawing Board: Rethinking Cosmic Evolution After James Webb Revelations 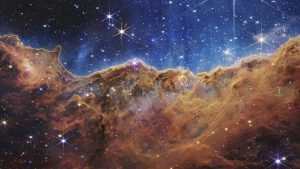 The data being gathered by the James Webb Space Telescope (JWST) is upending the scientific community’s theories of galactic formation and evolution, with the incoming images showing that both the number of galaxies and their relative complexity—amongst other conundrums—were much greater in the early universe than originally anticipated.

“We had in mind an idea of what galaxies at these [distances] would look like, and how much detail we’d be able to see, but I think the reality is just kind of blowing our mind,” exclaims Jeyhan Kartaltepe, an astronomer with the Rochester Institute of Technology.

Astronomers have been limited in regards to how distant an object can be imaged by how far into the infrared their telescopes can see: due to the phenomenon called “redshift“, the light emitted from extremely distant celestial objects loses energy as it crosses the ever-expanding cosmos, causing the frequency of the light to drop—and, correspondingly, its wavelength to increase—so that extremely distant phenomena that would have originally shone in the visible part of the spectrum can now only be seen in the far infrared.

Although the Hubble Space Telescope (HST) was designed to see into the infrared, it could only do so into the near-infrared, seeing wavelengths between 0.8 and 2.4 micrometers, limiting how far into the universe that the iconic ‘scope could see. JWST, however, was designed to be able to see wavelengths down to 28.3 micrometers, more than ten times deeper into the infrared than HST, and in turn allowing it to see much, much further into both space and the past.

When JWST finally began to peel back those hidden layers of the universe the researchers examining the data found that there were a lot more galaxies in the early years of the universe than they anticipated, and they were also surprisingly complex for such young structures. It was previously theorized that about 250 million years after the Big Bang that the earliest stars started to form, and about a similar amount of time passed after that before these young stars started to band together into the earliest galaxies.

But instead of finding mostly empty space dotted with the occasional budding galaxy, researchers found a universe teeming with galaxies—about ten times the expected number, with one survey discovering 44 previously unknown galaxies that existed a mere 300 million years after the Big Bang in the background of a single image taken of the SMACS 0723 galactic cluster.

“There’s hardly any empty space that doesn’t have something,” according to Kartaltepe.

These surveys also found that these post-Bang galaxies were not only relatively abundant, but that they were also quite well evolved for their time, appearing as proper disks as many modern galaxies do. The original theory was that most early galaxies would be irregular in shape, distorted by their gravitational interactions with neighboring galaxies, since everything was closer together in the early universe.

“With the resolution of James Webb, we are able to see that galaxies have disks way earlier than we thought they did,” explains Allison Kirkpatrick, an astronomer at the University of Kansas. The early appearance of these relatively-evolved galaxies presents a problem for the current understanding of galactic evolution. “We’re going to have to figure that out,” Kirkpatrick says.

And the conundrums being presented by JWST don’t end there: about three billion years after the Big Bang (~10.8 billion years ago) the universe went through a period of peak star formation that astrophysicists call ‘cosmic noon’, and with it peak brightness for the universe from so much light being produced by the abundance of stars.

However, when imaged by JWST the galaxies from that period in the universe’s history appear nearly nine percent smaller than when they were imaged by Hubble, meaning that they weren’t emitting as much light in the deeper infrared. Theories based on Hubble’s images suggested that early galaxies start out small and grow larger over time as they accumulated more matter, but the data from Webb suggests that this may be more complicated than originally assumed.

“It potentially changes our whole view of how galaxy sizes evolve over time,” according to University of California Santa Cruz astronomer Wren Suess.

Heavier elements are also proving to have formed much earlier than anticipated: as the universe began to cool after the Big Bang, subatomic particles such as electrons and protons began to coalesce from the energies released, and from them came simple atoms such as hydrogen, helium and lithium. Heavier elements would later be produced in the alchemical forges found in the hearts of the stars that would form in the years to follow, but JWST’s onboard spectrometer has found an unexpected abundance of oxygen present a mere 1.3 billion years after the Big Bang, barely enough time for even a fast-burning star to run through its entire life cycle.

These findings “will make us rethink the speed at which star formation occurs”, Kirkpatrick remarks.

Subscribers, to watch the subscriber version of the video, first log in then click on Dreamland Subscriber-Only Video Podcast link.
2022-08-25
Previous Headline News Post: Whitley and his Cabin Experiences are Featured in a New Documentary
Next Headline News Post: The Most Severe Heat Wave in History is Currently Taking Place in China