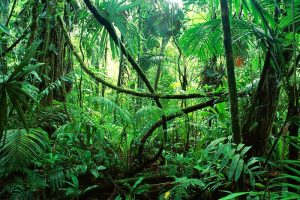 Researchers have recovered what has been found to be the world’s oldest DNA from sediments in Northern Greenland, with the two million-year-old genetic fragments revealing a landscape from a time when the now-barren Arctic landscape was lush with a variety of flora and fauna.

Beating the previous record for ancient DNA by one million years, the trove of DNA fragments, referred to as “environmental DNA” (eDNA) was recovered from a fossil deposit in North Greenland’s Peary Land known as the Kap København Formation. Over the decades, this deposit has yielded fossils of trees from a coniferous forest and numerous insects, but few traces of vertebrate animal fossils have been found there, despite the fact that some of the insects that lived there at that time are known to live on mammal dung.

Instead, the deep sediments of Kap København have preserved fragments of the DNA of organisms that lived there two million years ago, with the genetic material identified as having belonged to animals such as geese, hares, lemmings, mastodons and reindeer, as well as plants such as birch, poplar and thuja trees; the DNA of microorganisms such as bacteria and fungi were also found.

“The ancient DNA samples were found buried deep in sediment that had built-up over 20,000 years,” explains study co-lead Professor Kurt H. Kjær, a geologist at the University of Copenhagen. “The sediment was eventually preserved in ice or permafrost and, crucially, not disturbed by humans for two million years.”

Although the eDNA-bearing samples were excavated in 2006, the genetic technology of the time was inadequate for detecting the fragmentary code; advances since then have allowed researchers to extract and identify such ancient DNA. As for how the fragile molecules have lasted for so long, Kjær’s study co-lead and director of the Lundbeck Foundation GeoGenetics Centre, Eske Willerslev, says that they believe “it’s because the DNA bound itself to mineral particles that enabled its survival beyond what was thought possible. The bond reduces the rate of spontaneous chemical degradation.”

Two million years ago the climate of North Greenland was much warmer than it is today, seeing an average summer temperature of 10°C (50°F) and a winter average of -17°C (1.5°F); this comparative warmth allowed boreal forests to thrive across the landscape, and with them the animals, both small and large, that at the time came with them.

Previously, it had been assumed that the range of mastodons, an extinct pachyderm similar to woolly mammoths, did not extend as far north as Greenland, instead only roaming the landscapes of North and Central America.

“The mastodon was a great surprise. It’s never been found on Greenland before,” Willerslev explains. “However, the greatest surprise was this unique ecosystem of Arctic and temperate species mixed together with no modern analog.”

“I don’t think anyone would have predicted Greenland holding such a diversity of plants and animals two million years ago at a time when the climate was very similar to what we expect to witness in a few years because of global warming,” Willerslev added.

Subscribers, to watch the subscriber version of the video, first log in then click on Dreamland Subscriber-Only Video Podcast link.
2022-12-11
Previous Headline News Post: Signs That Black Holes Might Be Wormholes May Have Already Been Detected
Next Headline News Post: Ocean Dwelling Culprit Behind Great White Shark Mutilation Mystery