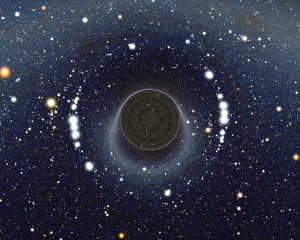 In theoretical physics an Einstein-Rosen bridge—more commonly known as a wormhole—is a structure connecting two points in spacetime that can, at least under the right circumstances, offer a shortcut between those two points in space, with the apparent distance through the tunnel being shorter than the distance between the locations of its two ends in normal space. Although we have yet to detect these special spacetime bridges, a team of physicists has theorized a possible way of detecting their exit points—a method that also suggests that science might have already done so.

Black holes are areas in spacetime where gravity is so strong that even light can’t escape, and are theorized to be potential openings for Einstein-Rosen bridges; the exit for a theoretical wormhole, however, would be what is called a white hole, the inverse counterpart to a black hole that repels matter and energy as effectively as black holes are at attracting it. While scientists have discovered numerous black holes throughout the universe, including the supermassive black hole at the center of our galaxy, white holes have yet to be detected.

However, a small team of physicists with Bulgaria’s Sofia University may have found a way to detect black holes that are also the opening to a tunnel through spacetime, using a computer model of hypothetical matter that would swirl around the mouth of the wormhole before being drawn through it.

Their model, constructed as a ring of “fluid” that has become magnetized it orbits the mouth of the tunnel, showed that the electromagnetic field that would be emitted by the particles in this ring would roll and snap in predictable patterns, patterns that would polarize the light being emitted by the matter falling into the wormhole.

The interesting thing is that these polarized patterns have already been detected in the images of the two supermassive black holes at the center of both the M87 and Milky Way galaxies, meaning that there’s the possibility that these gigantic structures could very well be wormholes.

But how could we definitively determine whether or not a given black hole is a gateway to another point in the universe instead of just the ultimate dead-end for matter and energy unfortunate enough to pass close? Although it would rely on a great deal of luck, the research team hypothesized that if viewed from the side through a gravitational lens, such as one that might be generated by a large galaxy or another black hole, the light escaping from matter being drawn into the wormhole’s opening might be magnified enough to yield subtle differences between wormholes and ordinary black holes; data gathered from such a phenomenon could also be used to develop a technique that could weed out other wormhole openings without the need for a fortuitously-positioned gravitational lens.