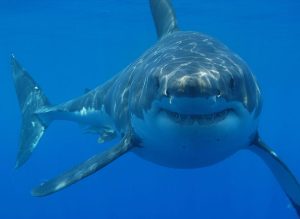 The bodies of great white sharks that have had their liver removed with what has been described as “almost surgical precision” have been washing ashore along the coast of South Africa for the last five years, with the latest batch of carcharodon corpses being discovered earlier this year. While the reason behind the apparent targeted mutilations of these apex predators remains a mystery, at least the culprit behind the long-running string of mutilations has been uncovered: a pod of killer whales.

The liverless sharks began washing ashore on the beaches of South Africa’s Western Cape province in 2017 with their bodies largely intact, save for a neatly-torn hole between the pectoral fins of each victim; it was through these holes that each shark’s liver was extracted, although other organs, such as the heart, stomach and testes, were missing in a handful of the cases investigated since the phenomenon began.

“We have never seen anything like this,” great white shark biologist Alison Towner explained in a May 2017 post. Towner is with the Dyer Island Conservation Trust team that carried out the autopsies that year, and described the “almost surgical precision” of the removal of the sharks’ livers.

But unlike the infamous cattle mutilations that occur in the United States, the culprit behind South Africa’s shark slaughter was caught on video earlier this year: in May a pod of orcas, traditionally known as killer whales, were recorded hunting, killing and tearing out the liver of a great white; the researchers that captured the footage believe that at least three other sharks were killed in the same manner during the pod’s day-long killing spree. Two individual orcas in particular, nicknamed “Port” and “Starboard”, appear to be responsible for the extracted entrails.

The video corroborated evidence of orca predation, in the form of bite marks, found on the shark corpses recovered since the killing spree began in 2017. When remarking on the condition of the corpses that she examined earlier, Towner said that “the dexterity these enormous animals are capable of is mind blowing, almost surgical precision as they remove the squalene rich liver of the white sharks and dump their carcass.”

The grizzly killings resulted in what the researchers are calling a “flight response” amongst the sharks, with the creatures vacating the area immediately after the killings began. Typically assumed to be the apex predator wherever they cruise, the great whites instead found themselves unable to cope with the coordinated hunting tactics of the orca and fled.

Unfortunately, the reason for this seemingly wasteful behavior perpetrated by this particular orca pod remains a mystery, although orcas have been known to engage in organ harvesting with other species, sometimes killing the calves of other cetaceans and eating only their tongues. There is speculation that the eating of the liver may be a form of energy conservation on the part of the orcas involved, focusing their hunting effort on just the energy-rich portions of their prey.