America’s Nuclear “Tomb” is being Threatened by Global Warming 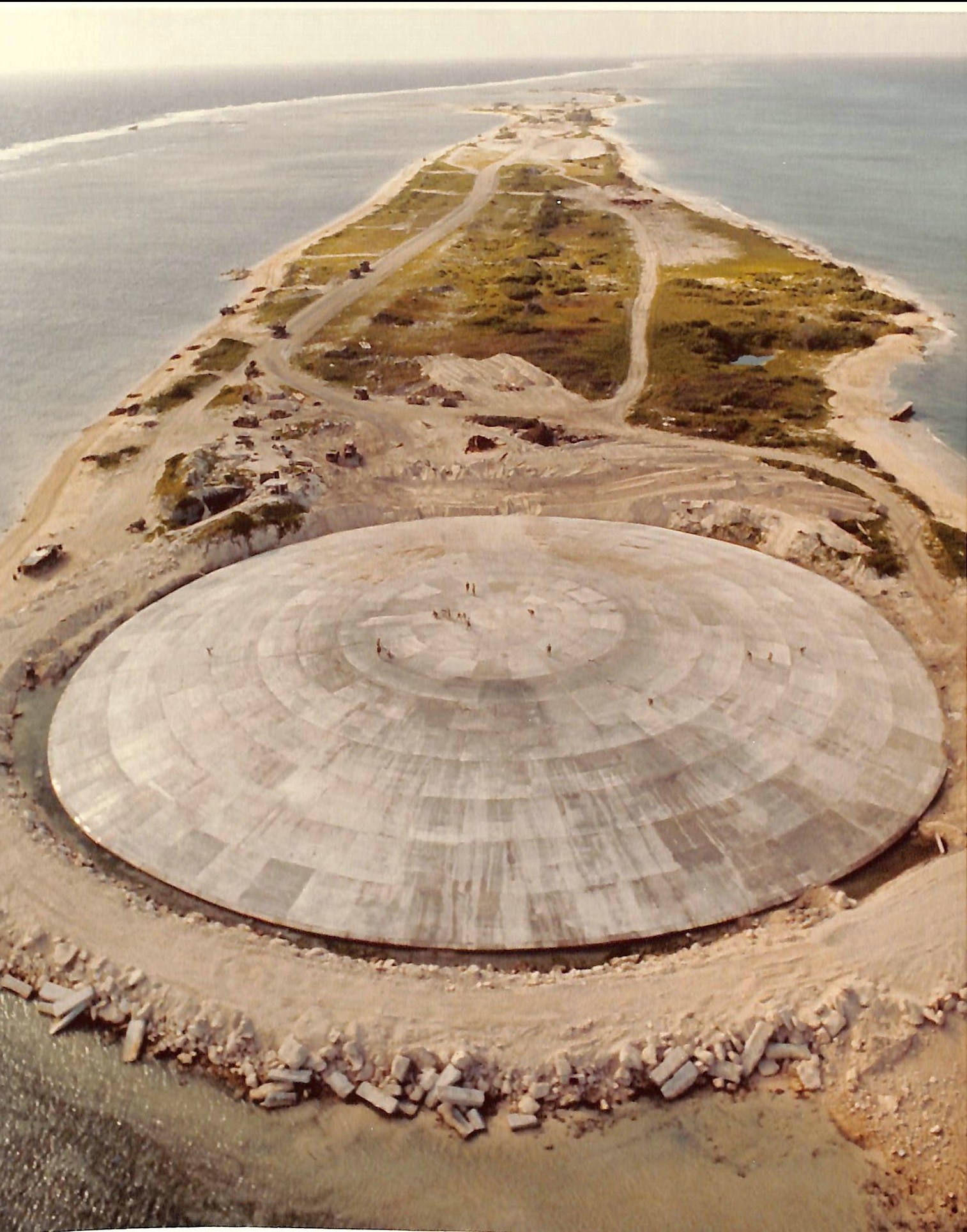 An abandoned repository of over 3.1 million cubic feet  (87,782 cubic meters) of radioactive debris left over from nuclear testing in the South Pacific is in danger of being cracked open by rising ocean levels, threatening to spill large amounts of the nuclear waste contained within—including highly-toxic plutonium—into the surrounding ocean.

Built between 1977 and 1980, the Runit Dome, known to the residents of the Enewetak Atoll as “The Tomb”, is a 377-foot  (115-meter) diameter, 18-inch  (46-centimeter) thick concrete dome that contains the equivalent of 35 Olympic-sized swimming pools of radioactive soil and debris removed from the Marshall Islands. Covering the crater that was blasted into the north end of Runit Island by the 18-kiloton Cactus nuclear test conducted on May 6, 1958, the dome contains the soil and metal from six nearby islands contaminated by the 67 nuclear detonations conducted over the Marshall Islands between 1946 and 1958, including 130 tons of irradiated soil from a nuclear test site in Nevada.

Because of the dome’s location, it is situated at sea level in a region of the Pacific ocean that has been subject to sea level rise of 0.3 inches (7.6 millimeters) per year since 1993, a rate well above the 0.11 to 0.14-inch (2.8 to 3.6 millimeter) global average, making the dome more vulnerable to the ravages of the surrounding ocean. Even half of the 1.5-meter (5-foot) rise in sea levels forecast  for the end of the 21st century could spell disaster for The Tomb, according to a United States Geological Survey Research Geologist Curt Storlazzi.

Even without the impending threat of further radioactive contamination—the mid-20th century nuclear tests have left half of the Marshall Islands unfit for human habitation—global warming-driven sea level rise is threatening to make even more of the islands uninhabitable.

“We have a lot of difficult choices to make,” according to James Matayoshi, the mayor of Rongelap Atoll. “If the seas don’t stop rising, we’re going to lose some places. Assuming we can save some, we’ll have to decide which islands, which places, for which people. But who gets to do that?”

By 2009, the Marshall Islands Nuclear Claims Tribunal ruled in favor of Marshallese attempts to secure compensation for the health and environmental impact made by US nuclear testing, but out of the $2 billion awarded to the remote island chain, only $4 million has been paid, and no enforcement mechanism exists to deliver the remaining funds.

In the meantime, the Runit Dome, intended only as temporary storage for the atomic waste, grows increasingly vulnerable to the encroaching sea. Adding to the problem is the cost-saving measures made in the dome’s construction, including the lack of a lining on the bottom of the crater to prevent seawater from entering through the porous soil underneath and mixing with the nuclear waste within.

Runit Island itself is also barely a meter (3.3 feet) above sea level, and even as early as 1982 a task force of the National Research Council warned that the dome might be breached by a severe typhoon. A 2013 inspection of the dome revealed that the cement it is made of is deteriorating, with vines growing in the resulting cracks, and radioactive groundwater underneath rises and falls with the tides. Additionally, plutonium isotopes discovered 2,800 miles away in the South China Sea had been traced back to the Marshall Islands.

Subscribers, to watch the subscriber version of the video, first log in then click on Dreamland Subscriber-Only Video Podcast link.
2019-11-25
Previous Headline News Post: The Nazca Lines Have 143 New Members in Their Geoglyphic Family
Next Headline News Post: A New World Update: The Audible Audiobook is Now Available