A Tough Season: The First Three Months of 2019 Saw Record-Breaking Weather Across the U.S. 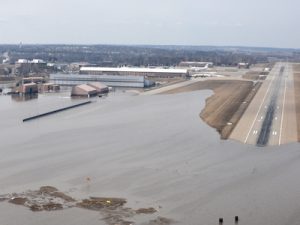 The sordid tale of the first three months of 2019 is one of record temperatures, both high and low, record snowfall and rainfall, and the resulting multi-billion-dollar disasters caused by the violent inland storms and massive flooding that followed in their wake.

January temperatures in the U.S. northwest started out the year somewhat above average, but the story took a dramatic downturn in February when record lows set in across the Midwest, a product of Arctic air being brought south by the ever-meandering polar vortex, with above average temperatures recorded in the eastern states, including temperatures in Alaska soaring well above average.

According to NOAA, the national average temperature for February of this year came in at 1.8°F below average, ranking the month “among the coldest third of the 125-year period of record,” and was “the coolest February since 2010,” according to NOAA’s U.S. Climate Assessment for February 2019, with “below-to much-below-average conditions [spanning] the West and into the Great Lakes states.” Conversely, “above-to much-above-average temperatures [were] observed from Texas to New England,” according to the Assessment, with the December–to-February (winter) average temperature across the contiguous U.S. coming in at 33.4°F, 1.2°F above average, “also ranking amongst the warmest third of the record.”

February also saw “widespread damage [resulting] from severe weather and flooding in the South (MS, AL, TN) and high winds across Ohio Valley (IL, IN, OH) and Northeastern states (CT, MD, MA, NJ, NY, PA, VA, WV),” according to NOAA. But this was just the beginning: the sharp contrast in temperatures—and the accompanying barometric pressure differences—between the western and eastern portions of the continent set up conditions for the so-called “bomb cyclone” that brought record-breaking weather to much of the contiguous United States in the following month.

Explosive cyclogenesis, better known as a bomb cyclone, occurs when an extratropical cyclone experiences a sudden drop in pressure of at least 24 mbar (hPa) within 24 hours, a pressure drop that causes an explosion of harsh weather in the region that the cyclone is passing over. This “explosion” takes the form of heavy precipitation and winds equivalent to a category-1 hurricane (74–95 mph, or 119–153 km/h). This phenomenon was the force behind the March 2019 North American blizzard—an event comparable to 1993’s “Storm of the Century”—that brought record snowfall to the affected states that later turned to heavy rain, causing extensive flooding in the Midwest that caused $2.9 billion in damages, and killed four people. 38 tornadoes were generated by the storm system, with at least one in Kentucky being reported as an EF-2 in severity.

A sudden temperature increase partway through the storm’s passage turned record cold and snowfall to heavy rain, causing record flooding in Nebraska, Iowa and South Dakota that broke over thirty records over a one-week period in mid March. Frozen ground covered with heavy snow was unable to adequately absorb the sudden torrent of rainfall, and rapidly-swelling rivers jammed with ice contributed to the widespread flooding event, a multi-state disaster that is still being dealt with more than a month later.

A second cyclone struck in mid-April (there’s some debate as to whether or not this one counted as a “bomb” cyclone, as the definition varies from latitude to latitude), prompting blizzard warnings from Colorado to Minnesota on April 10, and prompting concerns over wind-fueled wildfires in New Mexico, Texas and Oklahoma.

Things didn’t fare well on either side of the track both cyclones took, either: California’s long-suffered drought has broken, giving way to heavy rainfall with accompanying flooding, although increases in the snowpack topping the peaks of the Sierra Nevada Mountain Range have been recorded. Florida saw its second warmest February on record, with Naples clocking in a 90°F on the 19th, the earliest that temperature has been reached since record keeping began for the city in 1942.

Although the first three months of 2019 saw normal amounts of precipitation across Alaska, the state saw above average temperatures across the board, with the January-March average recorded at a whopping 10.7°F (5.9°C) above normal—February alone was 13.3°F (7.3°C) above normal—with the town of Klawock recording a temperature of 70°F (21.1°C) on March 19, the earliest date that the 70-degree mark has ever been reached for the state.

Subscribers, to watch the subscriber version of the video, first log in then click on Dreamland Subscriber-Only Video Podcast link.
2019-04-19
Previous Headline News Post: Astronomers Have Released the First Direct Image of a Black Hole
Next Headline News Post: The Miracle of Notre-Dame de Paris