The Miracle of Notre-Dame de Paris 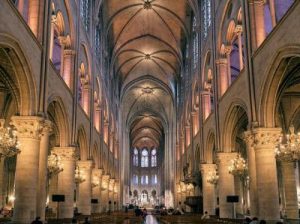 On the evening of April 15, 2019, a fire broke out in the attic of Notre-Dame de Paris, destroying two-thirds of the 850-year-old cathedral’s roof and the spire that towered above the central nave and altar. This catastrophe is a significant blow to the heart of the culture, history, and spirit of France, Catholics the world over, and indeed anyone with an appreciation for architecture, religion, history or culture. But despite the devastating pyre that threatened to consume this revered monument, the cathedral, and most of the irreplaceable artifacts contained within it, was spared from complete obliteration.

Miraculously, no-one was killed in the fire, with the church’s tourists having left the building for the day shortly before the fire broke out. Two police officers were injured while confronting the blaze, and a member of the Brigade des sapeurs-pompiers de Paris, the Paris Fire Brigade, was seriously injured while fighting the blaze, although his current condition has not been disclosed.

Although an official investigation has yet to pinpoint the exact cause of the fire, authorities have announced that there is no evidence that the fire was deliberately set; unofficially, it is believed that the fire may be linked to restoration work being performed on the cathedral’s roof, accidentally sparked by a short circuit or welding equipment.

The fire razed two-thirds of Notre-Dame’s lead-lined roof, previously supported by eight-century-old oak timbers, named “la forêt” (“the forest”, a testament to the fact that it took an entire forest to build the structure); the cathedral’s spire, a nineteenth-century recreation of the original 13th century spire, also burned and collapsed into the nave below.

More than 400 firefighters fought the 800 degree Celsius (nearly 1,500 degrees Fahrenheit) blaze largely from inside the cathedral, to reduce the risk of additional damage to the building’s structure, using water pumped from the Seine. Although aircraft were not used due to the potential damage that dropped water could cause to the hot stone, drones were used to gather visual and thermal images of the scene, and robots were used for work on the ground.

Firefighters were able to save the surrounding facade, the looming towers flanking the sides of Notre-Dame’s west entrance and the massive bells in their belfries, and the grand buttresses surrounding the building; exposed stonework has since been wrapped under tarpaulins for further protection. And, by no small miracle, the three massive 12th and 13th-century stained-glass rose windows remain intact, despite the enormous pressure that would have been placed on them by winds generated by the fire, and the heat that would have threatened to melt their lead fittings. Their supporting gables will be dismantled to avoid any further damage to the windows, one of which was found to be leaning outward by 20 centimeters (8 inches) after the fire. The windows have also been fitted with protective coverings to prevent any further damage.

The bronze statues depicting the Apostles that adorned the roof’s central spire are safe, having been removed the week before to accommodate restoration work being performed on Notre-Dame’s roof. The iconic 8,000-pipe organ that transformed the entire cathedral into a massive musical instrument also appears to have been spared from the conflagration. Many other statues in the lower chapel also appear to have survived, although further inspection will reveal how those located high in the arches will have fared under the intense heat.

During the fire, a legion of roughly 100 firefighters, police and church officials formed a human chain to rapidly evacuate priceless religious artifacts and works of art from the building, amongst them The Crown of Thorns, believed to have adorned Jesus Christ at the Crucifixion; a fragment of wood reputed to be a part of the True Cross; and the tunic of St. Louis. Their efforts resulted in the rescue of all of the church’s relics, having been previously relocated to an adjoining sacristy for the planned renovations, a portion of the church that was not affected by the fire.

The artifacts that had been evacuated were spirited to a secure location across the Seine at the Louvre Museum, where they will be assessed for fire and smoke damage, and whatever restoration efforts might be required.

Many other valuable artifacts that remained in the church, such as artwork that was on loan from other museums, also escaped the flames, with some works only suffering smoke damage; the full extent of the damage to these works is still being evaluated.

Although the April 15 fire might be the most catastrophic disaster suffered by Notre-Dame over the course of its 856-year history, the ancient cathedral is no stranger to the cycle of ruin and restoration; a brief look at that history may help place this most recent tragedy into perspective, and offer some hope for its future.

The cornerstone of the cathedral of Notre-Dame de Paris was laid in the spring of 1163, on a site on Paris’ Île de la Cité that even then was home to a long religious history, having been the site of a Gallo-Roman temple dedicated to Jupiter, followed by a succession of no less than four early Christian churches. Notre-Dame’s initial construction unfolded in four main phases that took 182 years to complete, with the high altar being consecrated in 1182, before the second phase of construction even began. The early thirteenth century saw the addition of double flying buttresses—the series of radial arches surrounding the church—that would add strength to the cathedral’s facade, that were in turn replaced in the 14th century by the even grander buttresses that we recognize today.

But even after the conclusion of Notre-Dame’s initial construction, the cathedral did not remain a static structure, but continued to grow and evolve over the eight and a half centuries that it has stood; celebrated, improved, looted, wounded, restored and rebuilt, Our Lady of Paris has been witness to coronations, royal marriages, state funerals, daredevil stunts, revolutions, global wars, terrorist threats, looting, desecrations—and of course, numerous restorations.

Some of Notre-Dame’s statues were damaged during a riot in 1548; during the reigns of Louis XIV and Louis XV, the cathedral underwent numerous alterations to update its Gothic look to a more contemporary style, including the rebuilding of the choir.

In 1793, the French Revolution saw Notre-Dame rededicated to the Cult of Reason, a state-sponsored atheistic religion, during which many of the cathedral’s artifacts were looted or destroyed, along with a large number of the statues lining the facade being vandalized or destroyed. Although Napoleon Bonaparte returned Notre-Dame to the Church in 1801, the cathedral had fallen into disrepair over the first half of the nineteenth century, with the sagging original spire being removed in this period due a half-millennium of weathering and neglect.

1831 saw the widespread success of Victor Hugo’s “The Hunchback of Notre-Dame”; with Notre-Dame Cathedral as its central setting, the popular novel brought renewed interest to the Gothic church, prompting King Louis Philippe to order a full restoration of the church in 1844. The 25-year restoration project saw the replacement of the now-removed spire, the reconstruction of the cathedral’s then-faded or destroyed details, and adding new elements where gaps in the building’s records prevented faithful recreations.

Notre-Dame underwent another restoration between 1991 and 1999, replacing much of the eroding exterior, and upgrading the cathedral’s organ with a computerized control system. That was followed by a 100 million euro restoration project initiated earlier this decade, with the current phase, started late last year, intended to renovate the central spire.

In the aftermath of the Notre-Dame fire, French President Emmanuel Macron has pledged to rebuild the sacred site, with offers totaling over a billion euros (1.13 USD) already having poured in from numerous sources. However, restoring the church to its former glory poses uniquely modern challenges, such as the lack of a sufficient source of timber within France to replace the ancient oak “forest” that supported the roof; this may necessitate the sourcing of wood from another part of the world, or perhaps it may be replaced with another material altogether. An international architects’ competition to rebuild the spire has been announced by French Prime Minister Édouard Philippe, calling for prospective designers to give “Notre-Dame a spire adapted to technologies and challenges of our times.”

Unfortunately, despite President Macron’s initial calls for Notre-Dame to be restored within five years, the endeavor is expected to take from twenty to forty years to complete, according to estimates made by various architects, due to the added resources that will be needed to faithfully replicate the appearance of the cathedral’s original details, balanced against hidden structural reinforcement that will be required to prevent similar disasters in the future.

Regardless of how long the resurrection of Notre-Dame de Paris, the ancient cathedral will, once again, be rebuilt. The deputy secretary-general of the Conference of French Bishops, Ambroise Laurent, remains optimistic. “We still have the main parts of the building so hopefully we will celebrate again in this cathedral.”

One can’t help but marvel over how much of the cathedral has been left intact: the Notre-Dame fire was fueled by millennium-old dense hardwood, an intense conflagration that would have utterly demolished most other buildings; this is undoubtedly a testament to both the efforts of Paris’ emergency workers and the ingenuity of those that built—and rebuilt—Our Lady of Paris in the first place.

Subscribers, to watch the subscriber version of the video, first log in then click on Dreamland Subscriber-Only Video Podcast link.
2019-04-24
Previous Headline News Post: A Tough Season: The First Three Months of 2019 Saw Record-Breaking Weather Across the U.S.
Next Headline News Post: New UFO Reporting Guidelines are being Drafted by the United States Navy