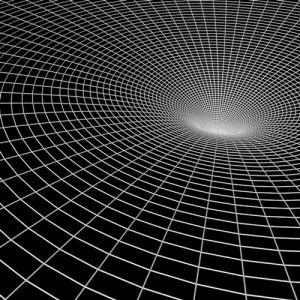 While one team of physicists is devising ways to recognize wormholes that might be hiding in plain sight, another team has been studying the properties of Einstein-Rosen bridges in the lab using entangled particles in a quantum computer. The researchers believe that the paired particles not only act as a proxy for the two endpoints of a real-life wormhole, but there’s the possibility that they might be connected by an actual gravity-generated wormhole.

“We found a quantum system that exhibits key properties of a gravitational wormhole yet is sufficiently small to implement on today’s quantum hardware,” explains study co-author and Caltech Professor of Physics Maria Spiropulu. “This work constitutes a step toward a larger program of testing quantum gravity physics using a quantum computer.” Spiropulu also added that their experiment offers “a powerful testbed to exercise ideas of quantum gravity.”

The idea that there might be a connection between wormholes and quantum entanglement—a phenomenon where two (or sometimes more) particles share the same state, regardless of the distance between them—was first proposed in 2013 by theoretical physicists Juan Maldacena and Leonard Susskind. Their idea was that the quantum connection between two entangled particles is actually an Einstein-Rosen bridge—albeit one that only affects particles at the quantum level—an idea that, if true, would draw a link between the seemingly-contradictory worlds of general relativity and quantum physics.

This hypothesis led to the idea that the same phenomenon might not just be limited to the instantaneous transfer of quantum information between two points, but that it might also extend to the macroscopic world: in 2017, Harvard University physics professor Daniel Jafferis theorized that if negative energy could be used to hold a wormhole open long enough for something to pass through, the description of the gravitational process that would occur would be the same as that of the quantum teleportation process seen in quantum entanglement experiments. This hypothesis was later refined into a model called the Sachdev–Ye–Kitaev (SYK) model (named after the physicists that developed the model, Alexei Kitaev, Subir Sachdev and Jinwu Ye), where the quantum dynamics involved were equivalent to quantum gravity effects.

Five years later a team of physicists led by Jafferis is experimenting on that potential link between classic gravity-generated wormholes and quantum entanglement, using Google’s 53-qubit Sycamore quantum processor. Using a simplified version of the SYK model that preserves the model’s gravitational aspects, the researchers applied one of Sycamore’s qubits to the system, and found that information transferred from one part of the system underwent quantum teleportation to the receiving end, meaning that quantum information had traveled through a simulated gravitational wormhole.

“We performed a kind of quantum teleportation equivalent to a traversable wormhole in the gravity picture,” explained PhD student and Jafferis’ study co-lead Alexander Zlokapa. “To do this, we had to simplify the quantum system to the smallest example that preserves gravitational characteristics so we could implement it on the Sycamore quantum processor at Google.”

The quantumly-simulated wormhole exhibited behavior that would be expected to be seen in both an Einstein-Rosen bridge and a pair of entangled particles; for instance, despite there being a number of ways that the information being teleported through the model could have been transferred, the method instead bore a resemblance to how something might pass through a theoretical Einstein-Rosen bridge.

The team hopes to expand their experiment to include more complex quantum circuits, albeit ones that have yet to be built. In the meantime, they plan to continue sliding information through their simplified quantum wormholes to refine their methods.

“The relationship between quantum entanglement, spacetime, and quantum gravity is one of the most important questions in fundamental physics and an active area of theoretical research,” explained Spiropulu. “We are excited to take this small step toward testing these ideas on quantum hardware and will keep going.”

Subscribers, to watch the subscriber version of the video, first log in then click on Dreamland Subscriber-Only Video Podcast link.
2023-01-05
Previous Headline News Post: Happy New Year and May 2023 be Extremely Uninteresting EXCEPT FOR…
Next Headline News Post: Humans Travelled the Seas 450,000 Years Ago, According to New Maps of Ancient Shorelines