Linda Moulton Howe and Whitley on Mysterious Booms Recorded at His House, then Mia Feroleto on the Power of the Final Consciousness and Contact Conference

Home  »  Dreamland Podcast   »   Linda Moulton Howe and Whitley on Mysterious Booms Recorded at His House, then Mia Feroleto on the Power of the Final Consciousness and Contact Conference

On July 15, Whitley was meditating at about 4AM when two loud booms detonated in quick succession outside of his house. He assumed that they were firecrackers and thought nothing of it. But then, at 3:56 AM on July 23,the same thing happened. This time he was not in the house and his surveillance system recorded the sounds and the flash that went with them. A video expert observed that the flash appeared to come from above the house. Although he couldn’t definitively identify the cause of the sounds, it later developed that numerous people in the area heard it and saw the flashes and reported this on the Neighbors neighborhood events app. Reports came from about a square mile area.

While these could have been fireworks or gunshots, there are interesting reasons discussed in the show that suggest that this may not be the case.

This week, Linda Moulton Howe joins Whitley to discuss the event and compare some similar videos that she has collected over the  years. Whitley’s friends don’t call his condo “the unquiet flat” for nothing! (The image is from the video of Whitley’s surveillance system at the moment the booms took place. The flash on the picture frame is a reflection of the camera’s infrared light.)

THEN we move on to a powerful discussion with Mia Feroleto about her final Consciousness and Contact Conference, held two weeks ago in South Dakota. Whitley once again had a look into what appears to be another world while at the conference. You can read about that here. Mia tells us of the many high-intensity events that transpired at this remarkable conference. Enjoy Mia’s podcast New Obervations and read New Observations Magazine! 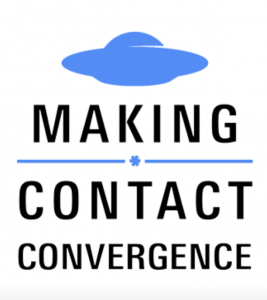 MAKING CONTACT is coming up! Join Whitley, Linda Moulton Howe, Chris Mellon, Lue Elizondo, Mark Sims, Danny Sheehan, Ralph Blumenthal and MANY OTHERS at this huge event August 18-22. It’s a virtual event held on “the Island,” an amazing multi-purpose online “campus” with meeting rooms, discussion areas, lecture halls and much more! Get up close and personal with this powerful group of cutting edge speakers, all of them talking about how WE THE PEOPLE are going to be the architects of contact, NOT governments!

To sign up, go to MakingContact.com. The list price for the full program is $249 per person. Be sure and use the coupon code WhitleySave100 as you check out and drop that price to $149 per person! To get your ticket now, click here. To learn more about Making Contact and its virtual campus, click here.