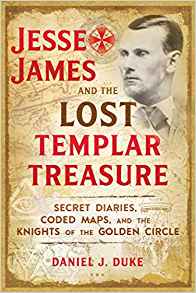 Jesse James was an outlaw. He was murdered by his friend Robert Ford on April 3, 1882. He had absolutely nothing to do with buried treasure, knew no esoteric secrets and was never called anything remotely like James Lafayette Courtney. And he wasn’t connected with the Masons, and certainly had no idea where the legendary treasure of the Knights Templar was buried.

EXCEPT his great-great grandson Daniel Duke says different! Listen as Dan tells us the amazing secret story of his great-great grandfather, and his research into some mysterious maps and information he has left behind suggesting that he knew some of the deepest secrets there are, including the location of the Templar Treasure, the secret meaning of Andre Poussin’s painting Et In Arcadia Ego and much more!

This is Dreamland in its treasure hunting mode and at it’s very best. As Whitley says, “fasten your seatbelts folks, you’re in for quite a ride!”

Get the Jesse James and the Lost Templar Treasure through us. Click here.

Get Jesse James Lived and Died in Texas. Click here.