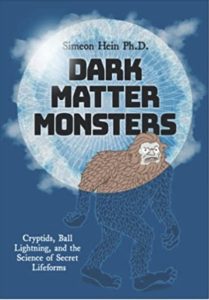 Too many Bigfoot researchers prefer to ignore the high strangeness aspects of the phenomenon because they’re after mainstream credibility, so the other incredible events that often go along with these sightings are frequently ignored. Despite this, Bigfoot witnesses often report glowing orbs, telepathic communications, and time slips in conjunction with their Bigfoot experience. Dr. Simeon Hein, experienced remote viewer and director of the Institute for Resonance Viewing in Boulder, Colorado, returns to Dreamland to share a new vision of Bigfoot, presenting unique ideas and wonderful stories about the strange mysteries that surround Bigfoot, why such strange apparitions happen, and how they may relate to some recent physics discoveries.

And right on cue, at the end of the show, an electrical anomaly takes place!

Visit Simeon Hein at SimeonHein.com. Indulge your curiosity and get Dark Matter Monsters through us! Click here.

Not a subscriber? WHAT ARE YOU WAITING FOR?? Whitley is one of the all time great podcasters, so join the fun! Click here to find out more.

Subscribers, to watch the subscriber version of the video, first log in then click on Dreamland Subscriber-Only Video Podcast link.
2022-10-14
Previous Dreamland Podcast Post: Second Week of a Brain-Bending 2 Week Discussion: Why do Insiders call our Visitors Our “Sponsors?” and are WE Technology?
Next Dreamland Podcast Post: And Now for Something (Someone??) Completely Different