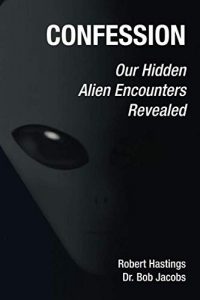 Robert Hastings and Dr. Bob Jacobs are among the most highly respected UFO researchers in the field. Now, with their new book Confession, they reveal another side to themselves: they are also abductees, and the most recent encounter was just a few weeks ago!

Robert Hastings is the world’s leading expert on UFO activity at nuclear weapons sites. He has gathered the testimony of more than 160 US military veterans since he started this research in 1973. In September of 2010, he co-sponsored the UFOS and Nukes press conference in Washington DC in which 7 US Air Force veterans discussed their involvement in UFO-releated incidents at ICBM sites. He is also the author of UFOs and Nukes. To go to Robert’s UFOs and Nukes website click here.

Dr. Bob Jacobs was personally involved in an incident in which a UFO interfered with a dummy warhead in 1964. He was in charge of a tracking station in California which filmed the launch and got film of the warhead being struck by lasers as it rose into the upper atmosphere at 8,000 MPH. While he was warned not to speak of the incident, he was not made to sign a confidentiality agreement and does not have a security clearance, and therefore is free to discuss the incident, which he began to do 17 years after it happened.

What neither of these distinguished researchers has discussed publicly before now is the fact that they are both close encounter witnesses. In this show they tell their personal stories, including a description of a harrowing high-strangeness event that happened to one of them in January of 2020!