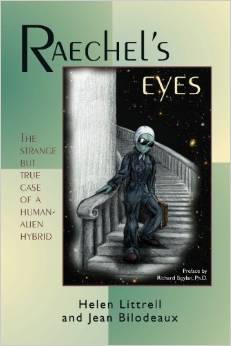 Could it be that the human race is being replaced by a new human-alien species, without our knowing it? This week, Linda Moulton Howe reports on an individual who believes that she is an alien-human hybrid. Linda interviews Helen Littrell and Jean Bilodeaux about Helen’s daughter’s relationship with a college roommate who they came to understand was an alien-human hybrid after she was observed to have avocado-green eyes with vertical black slits rather than human eyes. (She normally kept them covered with dark glasses, but they slipped off at one point.)
END_OF_DOCUMENT_TOKEN_TO_BE_REPLACED

Linda Moulton Howe, Captain Mark Woods and Whitley Strieber have no intention of dropping the issue of missing Malaysian Airlines Flight 370. In fact, the search of the southern Indian Ocean is winding down and authorities are FINALLY beginning to explore the idea that the plane may have been landed somewhere. Unfortunately, this may be too little too late, because if it did land, it is almost certainly being refitted right now to carry an atomic weapon.

So far, we are the only media outlet seriously discussing this extremely dangerous possibility. The authorities should have been conduction a simultaneous ground search as they combed the Indian Ocean, but there is no evidence that this has happened–at least, no publicly available evidence.
END_OF_DOCUMENT_TOKEN_TO_BE_REPLACED

Large amounts of debris from the Fukushima Daiichi nuclear power plant disaster are going to be washing up on Western Pacific shores over the next six months. But how great is the actual danger, and if there is a real danger, how can we protect ourselves? So far, all the EPA has done is to raise the danger limit on background radiation. Does this mean that the US government will follow the Japanese government into the labyrinth of lies and denial? Over the next few months, we’ll find out, and Dreamland will continue reporting on the situation truthfully and accurately.
END_OF_DOCUMENT_TOKEN_TO_BE_REPLACED

The media has gotten bored with the story of the Fukushima Daiichi nuclear power plant meltdown, but the radioactive debris will soon reach the US West Coast. Should we worry? Not only worry, but prepare. This is a very dangerous situation. Here, Linda Moulton Howe reports on the largely ignored story of what happened to the crew of the USS Reagan when it approached within two miles of the burning power plant in order to offer assistance. The Japanese had lied to the US Navy about the level of contamination present, but when the Reagan’s officers realized that they were sailing into a deathtrap they immediately withdrew to a hundred miles offshore. But crew members have been devastated by radiation sickness since.
END_OF_DOCUMENT_TOKEN_TO_BE_REPLACED