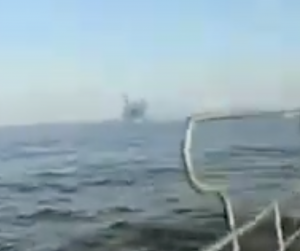 This video was published privately on YouTube 10 years ago. Until an Unknowncountry.com subscriber saw a clip of it on Tik-Tok, we were unaware of it. The language being spoken is Slovak. The logo at the bottom of the video may be from a documentary called Terra Magica about wine growers in Slovenia. The  video does not appear to be part of any such documentary. One of our video analysts has this comment:

The big splash looks plausible given the speed and force with which the UFO dives. The UFO’s inertia-free motion can look fake, but my guess is that it’s genuine.Hard to tell about the language.. but the audio makes sense vis-a-vis the overhead passage of the jets.With video as shaky as this, it’s hard to do CGI. You first have to start out with a stable image, add the special effects, and then add the shake in a way that looks natural. That’s almost impossible for amateurs to do.  Fake handheld shaking has been one of the tipoffs to many of the fakes we’ve seen.

Subscribers, to watch the subscriber version of the video, first log in then click on Dreamland Subscriber-Only Video Podcast link.
2021-06-17
Previous Out There Post: Blue UFO Over Hawaiian Island of Oahu
Next Out There Post: Strange Object Flies Across S. Carolina Town