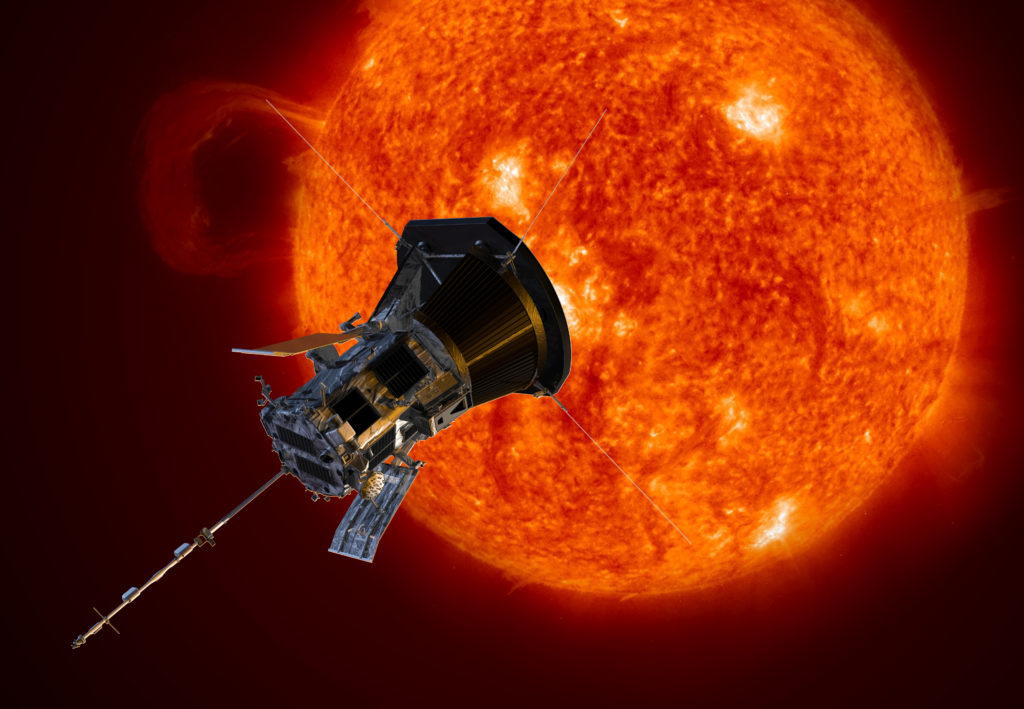 NASA has released the discoveries made during the first two orbits of the Sun-skimming Parker Solar Probe—now the fastest known artificial object to orbit the Sun—revealing high-speed solar winds and powerful rogue plasma waves, revelations that point out that we have significant gaps in our understanding of how the Sun works.

Launched in August 2018, the Parker Solar Probe is tasked with studying the Sun’s corona, the 5 million-kilometer (3,110,000-mile) outer layer of our star’s atmosphere. To accomplish this, the probe is flying closer to the Sun than any previous mission, having already passed twice within 24 million km (15 million miles) of the Sun’s surface on November 8, 2018, breaking Helios 2’s 1976 record of 42.73 million km (26.55 million miles) in the process. The close approaches also sped the probe up to a record-breaking 343,000 km/h (213,200 mph), making it the fastest artificial object to orbit the Sun.

But Parker’s blinding speed isn’t the only fascinating thing about the probe’s sun-drenched mission, as made an unexpected discovery when it was still only roughly three-quarters of the way to the Sun: the solar wind there was much more powerful than anyone could have predicted.

“To our big surprise, by the time we got to our closest approach, [the solar wind] was flowing between 35 and 50 kilometers per second around the Sun,” exclaims Justin Kasper, a professor of space sciences at the University of Michigan and lead author of one of the studies on the Parker Solar Probe’s data. These speeds are comparable to Mercury’s average orbital speed of 47.4 km/s, who’s orbit lies just outside the space Parker made these measurements.

“That’s something like 15 to 25 times faster than the standard solar models predict, so we’re missing something really fundamental in our standard models of the Sun—how it rotates and how the wind escapes—and that’s really interesting,” according to Kasper.

We tend to think of the solar wind, a stream of charged particles such as consists of electrons, protons and alpha particles,  as flowing directly outward from the Sun, but instead it forms an outwardly-radiating vortex, swept around the Sun by the rotation of the star’s intense magnetic field. Parker also encountered powerful “rogue” plasma waves called “Alfven waves”, large-scale ripples flowing through the magnetized plasma emanating from the Sun.

These sudden gusts of solar wind are so powerful that they distort the Sun’s magnetic field as they blast through it. “It gives you a sense of just how much energy is in these rogue waves as they go by compared to the regular Alfven waves that we’ve seen before,” Kasper continues.

These rogue waves might offer a solution to one of the biggest mysteries presented by the Sun, known as the coronal heating problem. While the Sun’s surface is a balmy 5,500°C (10,000°F), the corona, for unknown reasons, has a temperature thousands of times higher, typically between 1 to 2 million degrees Celsius (1,800,000 to 3,600,000°F). It’s entirely possible that these powerful waves are part of the mechanism that imparts so much energy to the Sun’s outer layers.

“We were looking for buckets of energy when we got closer to the Sun, and we’re seeing some very large buckets going by, so that’s good,” Kasper explains, in regards to the potential for these Alfven waves to be part of the mechanism behind the corona’s high temperatures. “In our initial analyses, they’re definitely carrying a lot of energy so they are very promising as an energy source.”