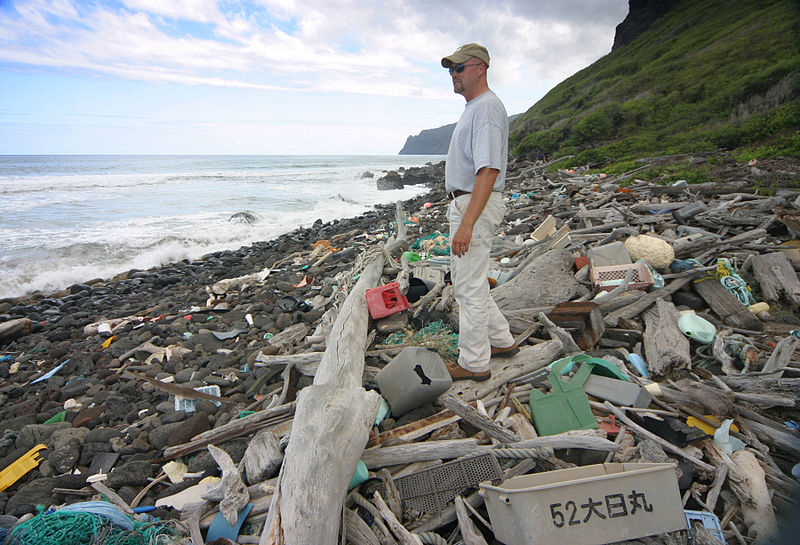 An effort to rid the oceans of plastic waste that was launched seven years ago has finally borne fruit: the nonprofit organization The Ocean Cleanup reports that one of their ships was able to successfully gather plastic pollution from their proof-of-concept prototype operating in the Pacific Ocean—including tires, microplastics, ghost nets, and crates, from the ocean—to be delivered to a facility for recycling.

Founded in 2013, the concept for The Ocean Cleanup was outlined in a 2012 TED-talk presentation by founder Boyan Slat. The design involves a free-floating barrier that is slowed by a parachute-like apparatus that trails behind it, to ensure that the assembly is traveling slower in the ocean current than the plastic detritus it intends to capture. Every few weeks a support ship gathers up the flotsam collected in the barrier, taking the rubbish back to shore to be properly processed. The barrier only extends three meters (9.8 feet) deep into the water, to allow marine life to swim under the apparatus.

“We are now catching plastics,” Slat announced in a press release. “After beginning this journey seven years ago, this first year of testing in the unforgivable environment of the high seas strongly indicates that our vision is attainable and that the beginning of our mission to rid the ocean of plastic garbage, which has accumulated for decades, is within our sights.

“We now have a self-contained system in the Great Pacific Garbage Patch that is using the natural forces of the ocean to passively catch and concentrate plastics,” Slat continued. “This now gives us sufficient confidence in the general concept to keep going on this project.”

This marks The Ocean Cleanup’s second expedition to the North Pacific Gyre, the home to the Great Pacific Garbage Patch, a 1.6 million square kilometer (617,764 square mile) area of the Pacific that is host to an unfortunate concentration of discarded plastic items and scrap. Ocean Cleanup aims to recover 50 percent of the debris from this patch over the next five years.

A 2014 study found that roughly 60 percent of the plastics drifting through the oceans originate from discarded fishing gear such as buoys, lines and nets; the rest washes into the oceans from land due to improper disposal, the product of mismanaged or illegally dumped waste, and microplastics used in cosmetics and abrasive cleansers that have been simply flushed down the drain by consumers. A 2017 study estimates that 9.1 billion tons of plastic has been produced since 1950, with 7 billion tons of that no longer being used; it is estimated that 9 percent of that unused plastic has been recycled and 12 percent incinerated, leaving 5.5 billion tons remaining unaccounted for, somewhere in the environment.

As The Ocean Cleanup scales up their effort, Slat predicts that the plastic recovered by their efforts will eventually make the operation self-sustaining.

“I think in a few years’ time when we have the full-scale fleet out there, I think it should be possible to cover the operational cost of the cleanup operation using the plastic harvested,” according to Slat.