US Space Force Now a Reality 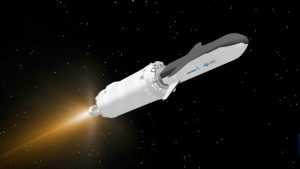 The order to form the United States Space Force has been passed by the US Congress, and was signed into law by President Trump on December 20.

Officially called “United States Space Force”, this organization will operate as a new service branch of the United States Armed Forces, along with the Army, Marine Corps, Navy, Air Force, and Coast Guard. This new branch will operate within the Department of the Air Force—similar to how the Marine Corps operates within the US Navy—and will be headed by a Chief of Space Operations, a position that will serve as one of the Joint Chiefs of Staff, and will in turn report directly to the Secretary of the Air Force. The formation of this new military branch–the first since the Air Force itself was made an independent service 72 years ago–was part of the National Defense Authorization Act (NDAA), a $738 billion defense policy bill that is expected to be quickly signed into law by President Trump.

This new branch will be spun off of the existing Air Force Space Command (AFSPC), and will draw on personnel from other branches of the military to fill its ranks. Originally formed in 1982, the AFSPC was tasked with the defense of US interests in space. Although championed by President Trump since 2018, the idea of a new Space Force was first put forward by the House Armed Services Committee in 2017.

But aside from the broad orders laid out in the NDAA, what will the Space Force’s day-to-day duties look like? Last September, the vice commander of Air Force Space Command, Lieutenant General David “DT” Thompson, sought to clarify what the new branch—having been the butt of countless jokes since Trump first broached the subject—will actually do.

According to Thompson, “There’s a discussion about this grand vision that the Space Force is going to orchestrate economics, and civil and all kinds of other sectors of the economy to take us to the moon and Mars. That’s not the way the American system works.” The Space Force will instead will focus on space-oriented military operations, leaving what traditionally have been civilian efforts, such as the exploration and economic exploitation of space, to civilian organizations.

The Space Force will also be substantially smaller than the other branches of the military: less than 200 personnel are mandated to make up the USSF’s ranks initially (151 Air Force personnel, 24 Army, 14 Navy, and nine additional personnel from the Pentagon and the U.S. intelligence community, according to Defense News), although the branch is expected to grow to 15,000 members at some point in the future.

The USSF is also expected to take on the support-oriented duties of its predecessor, the AFSPC; for example, if a another US military combatant command required space operators to help defend satellites targeted by enemy lasers or anti-satellite missiles, this duty would fall to the Space Force.

There has been no word on exactly what hardware the Space Force would employ—information that would remain tightly classified, in any case—although one might speculate that unmanned vehicles like the Air Force’s super-secret X-37B spaceplane might fall under the USSF’s command.