The End of an Era: NASA Announces the Shutdown of Interstellar Voyager Probes 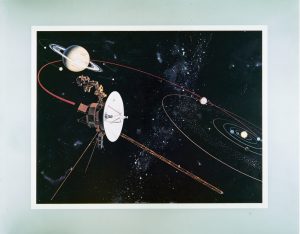 NASA has announced that after nearly a half-century of studying the outer reaches of the Solar System—and beyond—the Voyager 1 and Voyager 2 space probes will be shut down over the course of the next few years. Although both probes are still functioning perfectly, their nuclear fuel is expected to run out over the next few years, although their management teams hope to coax a bit more life from the spacecraft that have traveled farther than any other human-made object.

Launched on September 5 and August 20, 1977, respectively, the missions of Voyager 1 and Voyager 2 were timed to take advantage of a favorable alignment of the planets that would allow the probes to gain substantial gravity assists from the worlds they visited. Voyager 1 was able to gather data on Jupiter and Saturn, and also take a detailed look at Saturn’s largest moon, Titan; Voyager 2 would also visit Jupiter and Saturn, but would go on to explore Uranus and Neptune (Voyager 1’s close look at Titan sent it in a direction that took the probe away from the plane of the ecliptic, ending the planetary exploration portion of its mission).

After their grand tour of the planets of the outer Solar System, the twin probes headed for interstellar space: Voyager 1, with its faster trajectory, crossed that boundary on August 25, 2012, with Voyager 2 reaching the heliopause—the boundary where the solar wind is stopped by the pressure of the interstellar medium—on November 5, 2018. Since then both probes have been transmitting data on conditions past the edge of the Solar System back to Earth, offering a rare glimpse into what lies in the space between the stars.

Now, nearly 45 years and 23.3 billion kilometers (14.5 billion miles, or 156.2 AU) later, the probes’ caretakers are preparing to wind down the record-breaking (and record-bearing) probes’ missions. For the last three years their teams have been shutting down non-essential systems in order to tease out just a little bit more power from their radioisotope thermoelectric generators (RTGs), with their plutonium oxide fuel expected to have dwindled to the point where they can no longer power either craft after 2025. But with a little luck, the team hopes to find ways to tweak the probes’ systems to extend their mission for a few years more, hopefully to 2030.

“We’re at 44 and a half years,” remarks Ralph McNutt, a physicist at the Johns Hopkins University Applied Physics Laboratory (APL). “So we’ve done 10 times the warranty on the darn things.”

The Voyager probes have been gathering scientific data for so long it’s easy to forget that their initial mission—to explore the outer Solar system’s planets—was only supposed to last less than four years; the deep-space duo have spent the other four decades exploring what lies beyond the orbit of Neptune.

“Four years—that was the prime mission,” explains the Voyager team’s project manager, Suzanne Dodd. “But if an engineer had a choice to put in a part that was 10 percent more expensive but wasn’t something that was needed for a four-year mission, they just went ahead and did that. And they wouldn’t necessarily tell management.” Dodd also adds that it’s even more remarkable that Voyager’s construction teams were not only able to go that extra mile for not just one, but for two spacecraft, but also the fact that the probes are still in operation today.

Subscribers, to watch the subscriber version of the video, first log in then click on Dreamland Subscriber-Only Video Podcast link.
2022-07-11
Previous Headline News Post: Recent Findings Regarding Convergent Evolution May Mean Many of Our Evolutionary Trees Are Wrong
Next Headline News Post: WHO Calls for Investigation Into Lab-leak as Possible Coronavirus Origin