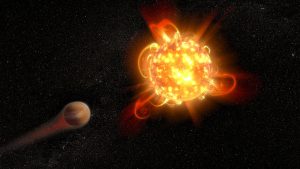 Young stars that are just starting their luminous lives are known to give off massive solar flares that can be many hundreds to thousands of times more powerful than the largest flares on record from our own middle-aged Sun. Juvenile stars burst with these “superflares” on a weekly basis, but it has always been assumed that they don’t occur on older stars like the Sun, but new research has shown that although their occurrence is relatively rare, older stars can still produce these gargantuan solar superflares.

The phenomenon of superflares was first spotted by the Kepler Space Telescope, in the form of some stars becoming extremely bright for short periods, as the telescope watched for the shadows of exoplanets as they passed in front of their home suns. It was theorized that these bursts of energy were massive solar flares that could reach up to ten thousand times the intensity of a typical solar flare, caused by the volatility of the young stars that they were observed to be emanating from.

“Large amounts of magnetic energy stored around large starspots on the surface of stars can cause superflares,” explains astrophysicist Yuta Notsu, a visiting researcher at the University of Colorado Boulder. “Young, quickly rotating stars can generate such large amounts of magnetic energy very efficiently because of the large rotational shears in the stellar interior.”

Not satisfied with the idea that older stars might set aside such immature outbursts later in life, Notsu started digging: after eliminating other potential sources for such massive energy bursts, Notsu combed through data gathered by both space and ground telescopes and found 43 stars similar to the Sun that had produced superflares. After running a statistical analysis, he found that older stars, such as our 4.6-billion-year-old Sun, should emit superflares from time to time. Thankfully, they only seem to do so every few thousand years, fairly seldom compared to the weekly outbursts that newly-formed stars make.

“Our current study only shows superflares can occur once every 2,000 to 3,000 years, and it is not clear about the next 100 years,” Notsu said in an interview with Gizmodo. Although we can’t make any long-term predictions as to when a superflare might erupt from the Sun, we may get some advance warning, in the form of massive sunspots. “Our results suggests the existence of large starspots, or sunspots, is a necessary condition for superflares. So at least, we can say that if such large starspots emerge on the surface of the Sun, it is then highly possible for superflares to occur.”

Although a superflare produced by our own Sun likely wouldn’t be disruptive to life on Earth, it would be a deal-breaker for our civilization. Whitley’s 2012 e-book “Solar Flares: What You Need to Know” outlines the danger regular flares pose to human civilization, such as the disruption of orbiting satellites and extensive damage that would occur to our energy grid and electronic devices, but a superflare would potentially ramp these effects up by hundreds of times, and would likely mean the end to electricity-based technology as we know it.
Attempts to determine if the Sun has produced superflares in the recent past has proved inconclusive, due to the difficulty of trying to match evidence in the geological and historical record with such an occurrence, so it’s difficult to say for sure if Sol is even capable of producing such a high-energy flare. At least we’re unlikely to see such a phenomenon in the near future, as the Sun appears to be slipping into what may be a half-century-long grand solar minimum, where sunspots and solar flares will be relatively rare.
Image Credits:
News Source:
Dreamland Video podcast
To watch the FREE video version on YouTube, click here.