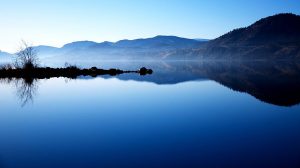 The lake monster known as Ogopogo has resurfaced in a video taken by a local shop owner, continuing a string of sightings of the elusive cryptid that calls Canada’s Okanagan Lake home.

On June 1, Jim La Rocque was visiting his mother-in-law’s lakefront property on Skaha Lake, a separate lake downstream from the much larger Okanagan Lake, when he spotted a series of pronounced ripples moving across the surface of the water, as if there was something swimming just below the surface of the lake. “It can’t be a wave,” La Rocque can be heard exclaiming on the video he managed to take of the phenomenon.

La Rocque describes that he heard “a swooshing sound, swoosh, swoosh,” as the mysterious wake traveled by. He estimates that whatever it was that was making the disturbance was 120 feet (36 meters) long, and may have been a serpentine creature with at least seven sets of fins.

“I’d describe it as like a dragon boat race, like with oars, so if you flipped the dragon boat upside down, you would see all those oars coming out of the water,” he says.

His son, sitting on a paddleboard offshore, also witnessed the odd sight, and was even closer to the disturbance than his father.

“He turns and sees a flipper come up out of the water, and hit the water,” La Rocque describes what his son told him. Needless to say, the young man quickly made his way back to shore after seeing the disturbance.

Although the name “Ogopogo” originates from a 1924 song called “The Ogo-Pogo: The Funny Fox-Trot”, Native American tradition held that a bloodthirsty creature called N’ha-a-tik, a Salish-Spokane-Kalispel word meaning “lake demon”, lived in Lake Okanagan, and required the sacrifice of a small animal before anyone could try to cross Okanagan’s waters. Modern sightings began in 1873, when the creature was spotted by a rancher, who described is as “a snake-like creature, which closely mirrored the often repeated local native legend.”

Last September, at least three sets of witnesses came forward to report that they may have spotted Ogopogo, or at least signs of the creature, including one witness that saw a “large moving object [that] suddenly reared out of the lake and moved quickly from left to right,” before he managed to get a photograph of the resulting wake on the surface of the water.

Although lakes Okanagan and Skaha are connected by the Penticton Channel running between them, the water flow is controlled by a dam at the north end of the channel, and the channel itself is only five feet deep in some spots, begging the question as to how Ogopogo might be in both lakes?

“I think it used to be one lake, uniting the Okanagan and Skaha, and rumor has it that at great depths there are caves, because the lake is very deep, and there is still no accurate information about how much,” La Rocque points out. Although we tend to think of legendary aquatic cryptids like Ogopogo, Lake Champlain’s “Champ” or Loch Ness’s “Nessie” as singular creatures, there’s a much greater likelihood that they would be members of a rare but otherwise undiscovered species, made up of a number of individuals that might inhabit more than one body of water.