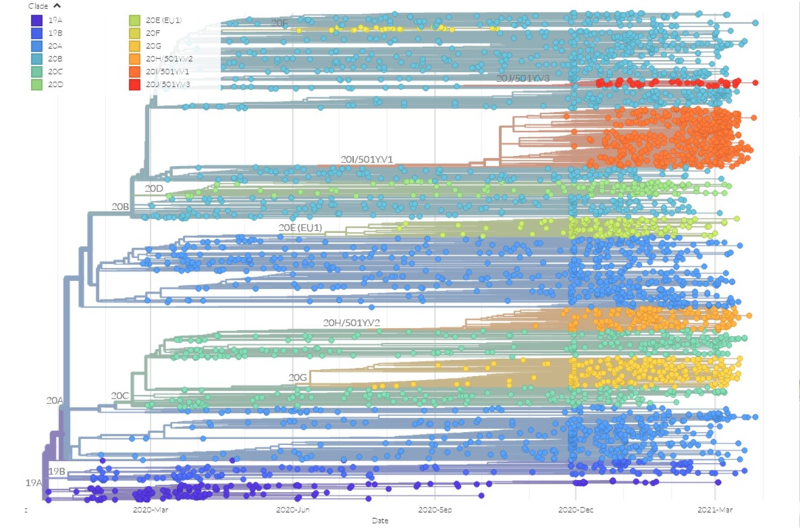 A new coronavirus variant has emerged in India that has three genetic mutations that could make the virus both more deadly and transmissible. Although this new variant, called B.1.617, is still under investigation, it appears to be the product of a number of mutations, with three of its fifteen known mutations being seen in the genes responsible for improvements to the virus’s spike protein.

Dubbed the “Bengal strain” by researchers in India, this new variant has been found in patient samples in at least four states: Chhattisgarh, Delhi, Maharashtra and West Bengal, and may be responsible for the massive surge of COVID-19 infections hitting India, to the tune of a third of a million daily new cases over the past few days—Friday alone saw nearly 347,000 people infected.

Researchers suspect that B.1.617 is the result of three mutated viruses merging to form a single virus that carries all three of the mutations of its predecessors. These mutations improve the virus’s spike proteins ability to attach themselves to a potential host cell’s ACE2 receptors, while simultaneously making it harder for the immune system to recognize the new variant. The third mutation may make it easier for the virus to infect a cell once it latches on.

Each time an infected cell replicates a virus there is a chance that the resulting individual virions aren’t an exact copy of the original, the result of a mutation that occurs during the replication process. Given the sheer number of virions produced inside an infected patient, that frequent roll of the dice means that mutations happen often, but the vast majority of these variants tend to either offer no real change in the virus’s effectiveness, or reduce its ability to harm.

But as something coherent could eventually be borne from an infinite number of monkeys hammering away at an infinite number of typewriters, this game of genetic chance occasionally produces a viral variant that has enhanced abilities of some sort, and with SARS-CoV-2 the world has seen a little over a half-dozen variants, called lineages, that are more dangerous than the original that emerged in Wuhan, China, in late 2019.

The three mutations found within B.1.617, called E484Q and L452R (both providing an improved ability to latch onto a host cell and immune system evasion), along with P681R (improved ability to infect the host cell once attached), were earlier identified as single mutations in three other SARS-CoV-2 variants that appear to have merged into a single virus. This hybridization happens when two or more variants infect a cell at the same time; sometimes the infected cell gets the instructions from each type of virus mixed up, and winds up assembling a new variant with features from both (or in this case, all three) of the individual variants.

Although it is suspected that the potential triple-threat that B.1.617 might pose is behind the recent surge of infections in India, researchers are cautioning that the verdict on this new lineage is not in quite yet; despite the mutations found in the variant’s genetic code, it might not be more deadly or transmissible if those portions of the virus’s code are not being actively expressed.

“Singapore researchers have done some work trying to link the mutations with clinical outcomes and transmissibility and have found no link between more severity or more transmissibility with newer mutants compared with the original lineages of SARS-CoV2,” explains Paul Tambyah, a professor of medicine at the National University of Singapore. Researchers have found earlier variants that were quadruple and quintuple-mutants, but they did not necessarily affect how well vaccines work.

“There is good data suggesting that the immune system, not just antibodies, can respond to multiple different mutants,” according to Tambyah.