More Water Found on Mars and the Unraveling of Jupiter’s Great Red Spot: News from Around the Solar System

The planets Mars and Jupiter have been making news lately, with a huge reservoir of water ice having been discovered on Mars—one big enough to fill a small ocean—and the unraveling of Jupiter’s Great Red Spot, a massive storm that may soon be coming to an end.

Using data gathered by the Shallow Radar (SHARAD) radar array onboard NASA’s Mars Reconnaissance Orbiter, researchers have discovered what may be one of the largest water reservoirs on the Red Planet, in the form of multiple ancient ice sheets that are buried deep under the sands of Mars’ north pole. Some of these layers contain up to 90 percent water ice, and hold enough water to cover a sphere the size of Mars in an ocean 1.5 meters (5 feet) deep.

“We didn’t expect to find this much water ice here,” exclaims Stefano Nerozzi, a graduate research assistant at the University of Texas Institute for Geophysics (UTIG) and lead author of the study. “That likely makes it the third largest water reservoir on Mars after the polar ice caps.”

These ice layers appear to be former polar ice caps, with each layer having been deposited during cold periods on Mars, and buried by sand during intervening warm periods; with each new layer, the topmost layer of sand would help to insulate the underlying ice from solar radiation and prevent it from evaporating into the atmosphere. This is further evidence of the precession of Mars’ axis, a 50,000-year wobble much like the one that gives Earth its precession of the equinoxes.

These ancient layers of ice are likely to have preserved a record of the ancient Martian climate, a key clue as to whether or not Mars was once suitable to sustain life. These ancient ice caps also appear to hold the same amount of water that’s present in glaciers and subsurface ice at lower latitudes, an important factor in supporting life around the planet.

“Understanding how much water was available globally versus what’s trapped in the poles is important if you’re going to have liquid water on Mars,” Nerozzi explains. “You can have all the right conditions for life, but if most of the water is locked up at the poles, then it becomes difficult to have sufficient amounts of liquid water near the equator.” 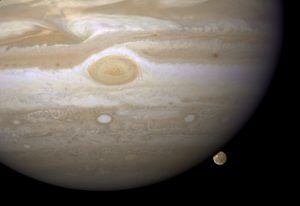 Meanwhile, Jupiter’s famed Great Red Spot appears to be unraveling, meaning that the crimson maelstrom mightn’t be around for much longer. A defining feature of the Solar System’s largest planet, the Great Red Spot is a massive, centuries-old storm that was 40,000 kilometers (25,000 miles) long a century ago—that’s more than three times the diameter of the Earth—but it has dwindled to 16,350 km (10,160 mi) in diameter as of 2017, just 1.3 Earths wide.

But now the Great Red Spot appears to be “unraveling”, with a large dark streamer spiraling off of the storm that now stretches around the planet. The space between the main body of the GRS and the dark band of clouds streaming off of the storm is also increasing, a circumstance that may allow smaller vortices to enter the storm, squeezing some of the clouds off of the GRS.

“The oval is … bleeding material from the GRS,” explains Christopher Go, an amateur astronomer that has been tracking the GRS from Cebu City in the Philippines. “This material will rotate around the GRS counterclockwise. As it goes south of the GRS, it is expected to distort the GRS, maybe causing it to shrink more.”

“This is very uncharted territory,” according to Glenn Orton, a senior research scientist at NASA’s Jet Propulsion Laboratory. “We’ve never seen it like this before.” Professional astronomers estimate that the GRS may have already shrunk by five to 15 percent over the past two weeks, but they don’t really know what to expect. NASA’s Juno orbiter is due to fly over the Great Red Spot in late July, meaning that it may learn more about what is going on later in the summer.

“I hope it’s still here,” Orton said, in regards to the GRS’s presence when Juno arrives in the region. “Nothing lasts forever.”

Subscribers, to watch the subscriber version of the video, first log in then click on Dreamland Subscriber-Only Video Podcast link.
2019-05-31
Previous Headline News Post: ‘I Almost Hit One of Those Things’: More US Navy Pilots Come Forward with their UFO Encounters
Next Headline News Post: “This is the New Norm”: Chaotic Weather Continues to Wreak Havoc Around the World