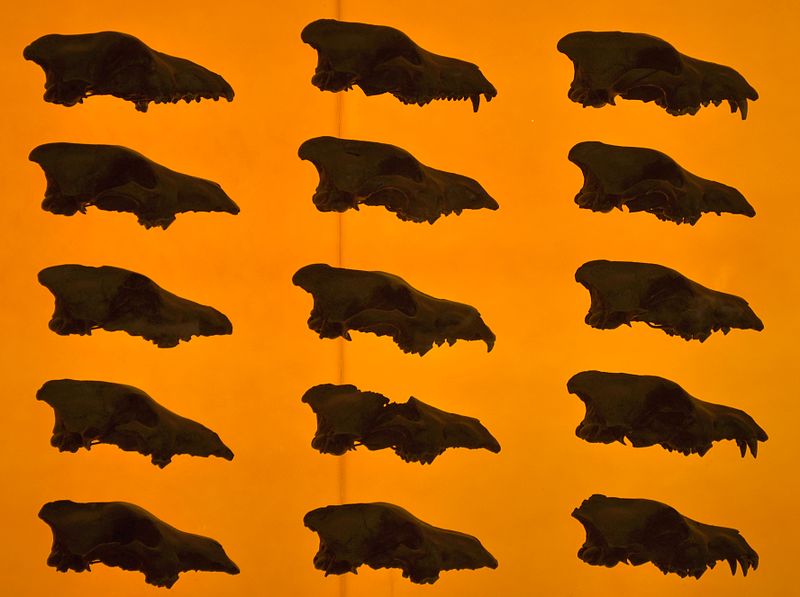 A new study into the genetics of one of the ice age’s most recognizable predators, the dire wolf, has revealed that despite the imposing creature’s similarity to modern gray wolves it wasn’t even a wolf, with differences in its genetics from those of other canids such as coyotes and dogs great enough that an entirely new scientific classification may be needed to describe the ancient hunter.

Considered iconic amongst the large megafauna of the last ice age, the now-extinct dire wolf is—or at least was—the largest species of the genus Canis known to have existed, with a shape and proportions similar to those of modern North American wolves, albeit about 20 percent larger than today’s gray wolves (Canis lupus). These impressive predators measured up to six feet long and sported imposing skull and jaw adaptations designed for taking down large prey such as camels, horses, bison and other large herbivores that roamed North America at the time. The species went extinct 9,500 years ago, and due to the close physical resemblance their remains have to modern wolves, scientists assumed the two species were close relatives.

But despite their close physical similarities, their respective genetics tell a different story: dire wolves weren’t closely related to modern gray wolves at all, to the point where dire wolves wouldn’t even be considered wolves; the last time the two species shared a common ancestor was about 5.7 million years ago, with the dire wolf evolving in North America on its own, instead of branching off from the gray wolf that originated in Eurasia.

“These results totally shake up the idea that dire wolves were just bigger cousins of gray wolves,” says paleontologist Grant Zazula, who was not involved in the study. Many of the assumptions made regarding aspects of the dire wolf such as pack dynamics and even their physical appearance was based on their close similarity to modern wolves. Many of these assumptions will need to be reevaluated in light of their newfound genetic identity. “The study of ancient DNA and proteins from fossil bones is rapidly rewriting the ice age and more recent history of North America’s mammals,” Zazula continues.

Modern wolves also appear to have no trace of dire wolf DNA in their genetic structure, implying that the two species were different enough to have not been able to produce viable hybrid offspring, as modern coyotes and wolves are capable of. This genetic bottleneck may have been a contributor to the demise of the species nearly 10,000 years ago: with the extinction of the large herbivores that they specialized in hunting, dire wolves’ other evolutionary strategy would have been to merge with another more adaptive species, like the gray wolf. However, “hybridization couldn’t provide a way out,” according to the study.

The remarkable physical similarities between dire and modern wolves would appear to be a textbook case of what is known as “convergent evolution”, where two unrelated species share similar adaptations due to their shared environments, such as in the case of birds and bats having evolved wings, despite being two completely different creatures. In the case of dire wolves and gray wolves, the two species not only developed nigh-identical adaptations, but also became remarkably similar in appearance.

While still considered part of the Canidae family, the genetics of dire wolves would suggest that they were never part of the genus Canis, of which wolves, dogs, coyotes and jackals fall under. The study’s authors suggest changing dire wolves’ binomal name from Canis dirus to something like Aenocyon dirus (terrible wolf), to better reflect their place in the Canidae family. Regardless of any changes that might be made to its scientific name, the iconic moniker of “dire wolf” is unlikely to fade away anytime soon. “They will just join the club of things like maned wolves that are called wolves but aren’t really,” Durham University archaeologist and study co-author Angela Perri speculates.

Subscribers, to watch the subscriber version of the video, first log in then click on Dreamland Subscriber-Only Video Podcast link.
2021-01-18
Previous Headline News Post: 2020 Has Tied With 2016 as the Hottest Year on Record
Next Headline News Post: Harvard’s Top Astronomy Professor Is Convinced That ʻOumuamua Was an Alien Spacecraft