Can an Interstellar Probe of Our Own Catch Up to ʻOumuamua? 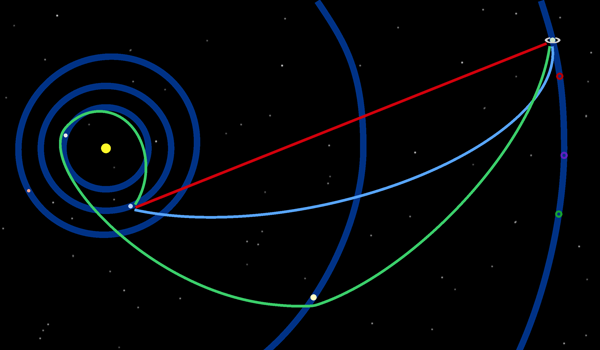 A UK-based nonprofit organization has proposed a mission to explore the Solar System’s first known interstellar visitor, the strange object called ʻOumuamua, via an ambitious long-range probe that would take decades to reach the enigmatic voyager.

The proposal, called “Project Lyra” by the Initiative for Interstellar Studies, involves launching a spacecraft that would gain speed by slingshotting itself first around Venus, then twice around Earth before finally using Jupiter’s gravity to overcome ʻOumuamua’s 97,200 km/h (60,400 mph) to study the object as it speeds off into interstellar space. The mission, if launched in 2028, should rendezvous with ʻOumuamua 26 years later in 2054 at a distance of 205 AU from the Sun (30.67 billion kilometers, or 19.06 billion miles), more than four times the farthest reach of Pluto’s orbit.

“Theories to explain the nature of 1I/ʻOumuamua have included a fractal dust aggregate, a hydrogen iceberg, a nitrogen iceberg, an alien solar sail, fragments of a tidally disrupted planet, and so on,” according to the group’s proposal. Due to its highly hyperbolic path when first discovered in 2017, ʻOumuamua was initially assumed to be a comet, but as it closed the distance between itself and the Sun it was found that the object lacked a coma and tail characteristic of such a celestial object, prompting astronomers to re-classify it as an asteroid.

But instead of slowing down after hooking its way around the Sun by being drug back by our home star’s gravitational pull, ʻOumuamua actually sped up slightly, traveling about a tenth of a percent faster than what was expected; this observation, along with the object’s unusual shape—either cigar or disk-shaped—prompted the then-chair of Harvard’s Astronomy Department, Avi Loeb, to theorize that the interstellar interloper was an artificial artifact left over from an extraterrestrial civilization, such as a solar sail.

Even at its closest approach to Earth, ʻOumuamua was too small to take detailed images of, leading researchers to estimate the object’s shape solely from its dramatic light fluctuations. Although astronomers gathered as much data as they could during ʻOumuamua’s extremely brief visit to our Solar System, it left behind far more questions than answers as it sped back into interstellar space, secrets that will be lost to the cosmos, unless we catch up to this distant messenger first.

Subscribers, to watch the subscriber version of the video, first log in then click on Dreamland Subscriber-Only Video Podcast link.
2022-01-21
Previous Headline News Post: A Once-In-A-Millennium Event: Tonga Volcanic Eruption Destroys Island
Next Headline News Post: Modern Humans Are at Least 300,000 Years Old, According to a New Discovery in Ethiopia