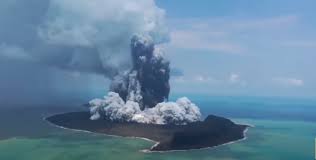 In what is being described as a once-in-a-millennium event, Tonga’s Hunga Tonga-Hunga Ha’apai volcano erupted on January 15, obliterating the island and generating a minor, yet deadly, tsunami.
Before the eruption, Hunga Tonga-Hunga Ha’apai was a seamount with a peak that rose only 120 meters (390 feet) above the surface of the ocean; the small island peeking out from the waves, formed by an eruption that occurred in late 2014, was obliterated in this recent eruption, an event that sent an ash cloud 30 kilometers (18.6 miles) into the atmosphere, and generating a boom that was heard as far away as Alaska.

A 1.2-meter tsunami was generated; although this isn’t a large tidal wave when compared to events such as the ones generated by the 2004 Indian Ocean and 2011 Tohoku earthquakes, it was more than tall enough to swamp the coasts of Tongo’s low-lying islands.

All of the structures on the island of Mango have been destroyed, with only two houses remaining on Fonoifua and extensive damage being reported on Namuka Island. Although Tonga’s Fua’amotu International Airport wasn’t damaged, the airport was covered in a blanket of ash and not expected to be opened until Wednesday, hampering humanitarian aid efforts.

The vast majority of Hunga Tonga-Hunga Ha’apai itself has been destroyed, with only small parts of the short-lived island remaining above water. Although the ash plume is not expected to have an appreciable impact on global temperatures, ecological effects on the local islands could include coral reef-damaging acid rain and an impact on the local fishing industry.

Subscribers, to watch the subscriber version of the video, first log in then click on Dreamland Subscriber-Only Video Podcast link.
2022-01-18
Previous Headline News Post: A Danish Tardigrade Becomes the First Quantum-Entangled Organism
Next Headline News Post: Can an Interstellar Probe of Our Own Catch Up to ʻOumuamua?