Astronomical Discovery: What appears to be a Micronova in the Sky 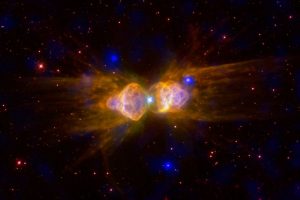 Astronomers have discovered a type of stellar nova called a “micronova”.  Although they release a fraction of the energy emitted by supernovas, micronovae can still burn through ten quadrillion tons of stellar mass in a single eruption.

“We have discovered and identified for the first time what we are calling a micronova,” explains lead study author Simone Scaringi, an astronomer at Durham University. “The phenomenon challenges our understanding of how thermonuclear explosions in stars occur. We thought we knew this, but this discovery proposes a totally new way to achieve them.”

Degenaar’s team “found that all these optical flashes were produced by white dwarfs. This observation was crucial in interpreting our result and for the discovery of micronovae.”

A white dwarf is the collapsed core of a star that has long since expelled its outer layers as a planetary nebula; typically composed of leftover heavier elements such as carbon and oxygen, the remaining stellar corpse isn’t massive enough to collapse down into a neutron star or black hole, but is still dense enough that a chunk of matter the size of a sugar cube would weigh over a ton on Earth. That high density means that a white dwarf with a mass similar to our Sun winds up being packed down into a sphere with a diameter of an Earth-sized planet; in turn, this results in a surface gravity hundreds of thousands of times greater than what we experience here on Earth.

If a white dwarf has a companion star that is close enough for it to draw material off of, such as a star like our Sun, it can draw hydrogen from that star’s atmosphere; this hydrogen begins to pool across the surface of the white dwarf, and over time the accumulated material, under intense pressure from the dwarf’s crushing gravity, builds up enough mass to undergo nuclear fusion, producing a planet-sized detonation that can take weeks, or sometimes even months, to finally burn out. The resulting explosion is what we see from Earth as a nova.

White dwarfs that produce micronovae, however, have intense magnetic fields that trap incoming material at their magnetic poles; instead of pooling evenly across the surface, this material builds up in a vertical column at one or both poles, with the material higher in the column amplifying the pressure placed on the material below.

Because of this focused pressure the resulting explosion doesn’t need as much accumulated material to initiate the fusion process, in turn resulting in a micro-explosion.

“For the first time, we have now seen that hydrogen fusion can also happen in a localized way,” according to study co-author Paul Groot, an astronomer at the Netherlands Radboud University. “The hydrogen fuel can be contained at the base of the magnetic poles of some white dwarfs, so that fusion only happens at these magnetic poles.”

Truly micro in nature, these detonations release approximately one millionth of the energy involved in Supernova. Despite being a member of the minutiae on our astral plane, these tiny giants burn through about 20,000 trillion tons of material in mere hours.

This discovery adds another explosive phenomenon to our knowledge of the cosmos, along with supernovae, caused when extremely massive stars collapse in on themselves at the end of their lives; recurrent novae, ordinary novae that repeatedly detonate material leached off of their companion star every few decades; and kilonovae, explosions resulting from the merger of two neutron stars or a neutron star and a black hole.

Subscribers, to watch the subscriber version of the video, first log in then click on Dreamland Subscriber-Only Video Podcast link.
2022-05-01
Previous Headline News Post: Indonesia’s Flores Man Mightn’t be Extinct After All
Next Headline News Post: A Mysterious Outbreak in Children Possibly Linked to Adenovirus