Indonesia’s Flores Man Mightn’t be Extinct After All 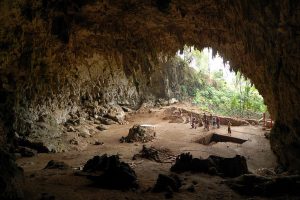 The “Hobbit-like” being that inhabited Indonesia 50,000 years ago known as Flores Man may not actually be extinct as previously assumed, according to local lore of the indigenous population on the Flores island where the fossils of the hominid were discovered in 2003.

In an essay published in The Scientist, social anthropologist Gregory Forth of Canada’s University of Alberta theorizes that, based on the folklore of the cultures that inhabit a region in Indonesia called Lio—along with numerous eyewitness accounts—that H. floresiensis may have not gone extinct and may still dwell in the forests of island of Flores.

Regarding his ethnographic fieldwork on Flores, Forth says that he had “heard tales of humanlike creatures, some still reputedly alive although very rarely seen,” and that according to the leader of the team that discovered the Flores Man fossils, Mike Morwood, the descriptions of these enigmatic creatures, “fitted floresiensis to a T.”

To that end, Forth began investigating the possibility of an extant non-human hominid inhabiting Flores, albeit one with extremely limited contact with the modern humans that now live there, leading his authoring of a book titled Between Ape and Human: An Anthropologist on the Trail of a Hidden Hominid.

Forth’s study focused not on the recovered fossils of H. floresiensis, but rather on what the folklore of the people in the Lio region have to offer, regarding what is described by them as an enigmatic “ape-man”. Although modern scientists might classify the species differently, the Lio consider the creatures to be animals, albeit ones that have descended from ordinary humans, morphing over time into an ape-like creature as a consequence of moving deeper into the forest and adopting an ape-like lifestyle.

Forth has also collected 30 eyewitness accounts of similar creatures, including one from a man who claimed to have disposed of the body of a creature “that could not have been a monkey but that was also not human, with straight light-colored hair on its body, a well-formed nose, and a stub of a tail,” according to LiveScience.

Regarding the species that the recovered H. floresiensis fossils belonged to, Forth says that “we simply don’t know when this species became extinct, or indeed dare I say — I did dare say — we don’t even know if it is extinct. So there is some possibility that it is still alive.”

Perhaps Whitley’s 2018 novel New, an exploration of what contact with this precise species might be like, has more to do with reality than any of us realized!
Image Credits:
News Source:
Dreamland Video podcast
To watch the FREE video version on YouTube, click here.

Subscribers, to watch the subscriber version of the video, first log in then click on Dreamland Subscriber-Only Video Podcast link.
2022-04-27
Previous Headline News Post: The New Solar Cycle Ramps Up With an X2.2-Class Solar Flare
Next Headline News Post: Astronomical Discovery: What appears to be a Micronova in the Sky