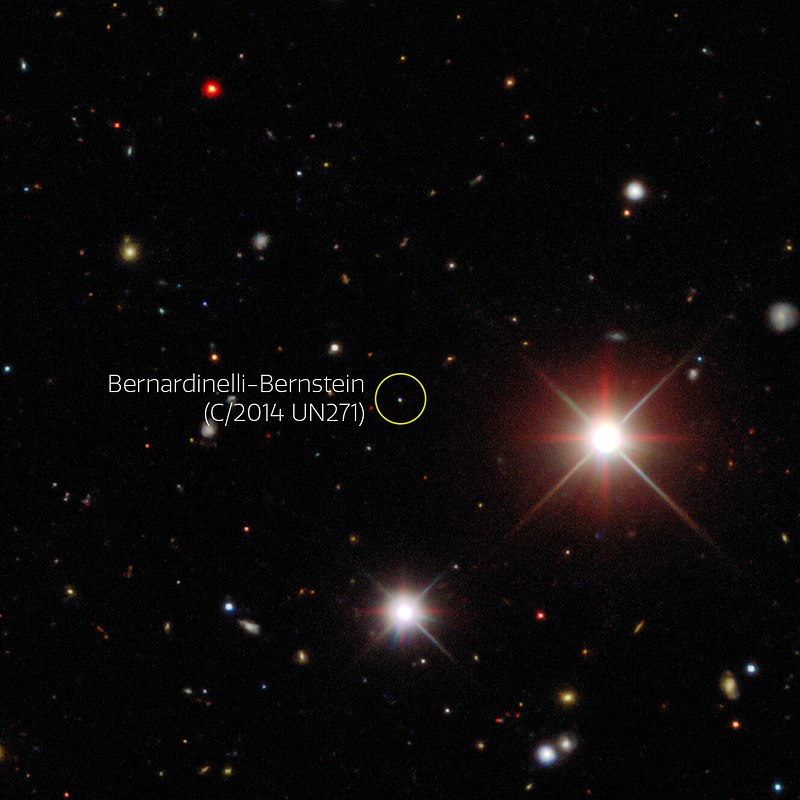 Astronomers have discovered a gigantic, 60-mile-wide comet that is hurtling toward the Sun. Although we only have ten years until it makes its closest approach, we needn’t worry: this Trans-Neptunian Object (TNO) is charted to miss our home planet by a wide margin, coming no closer than the orbit of Saturn.

First discovered in 2014 while it was still as far away as Neptune, comet C/2014 UN271’s identity as a comet wasn’t determined until June 2021, when a coma was spotted forming around the object. C/2014 UN271, also now officially known as “Bernardinelli-Bernstein”, is currently a little over 20 times farther out from the Sun than the Earth is, and is expected to pass between the orbits of Saturn and Uranus at its perihelion, making its closest pass on January 23, 2031.

In terms of size, this comet is a whopper—possibly the largest ever discovered—estimated to be between 100 and 200 kilometers (62 to 124 miles) across: to put that in perspective, the asteroid involved in the Chicxulub impact that ended the reign of the dinosaurs is estimated to have been at least 11 kilometers (6.8 miles) in diameter (possibly up to 81 kilometers (50.3 miles)) so an object of Comet Bernardinelli-Bernstein’s size would present an extinction-level event if it were to strike the Earth.

“[That] puts it on a similar scale, if not larger than, Sarabat’s huge comet C/1729 P1, and almost undoubtedly the largest Oort Cloud object ever discovered – almost in dwarf planet territory!” according to Sam Deen, a citizen astronomer posting on the Minor Planet Mailing List (MPML) forum.

But despite its size, Bernardinelli-Bernstein isn’t expected to put on much of a show when it hooks around Saturn’s orbit, due to its distance from Earth, probably becoming no brighter than Pluto at that time, with hopeful comet spotters needing at least a 200mm telescope to see it.

After nearly seven years of observations, astronomers have nailed down the mathematics of C/2014 UN271’s orbit (Dr. Pedro Bernardinelli, one of the comet’s discoverers, based his PhD on the computations), finding that the sizeable “dirty snowball” takes more than 3 million years to make a full orbit, a route that takes it nearly three-fifths of a light year into deep space.