50 Years On, Apollo 13 Still Stands as a Testament to the Human Spirit 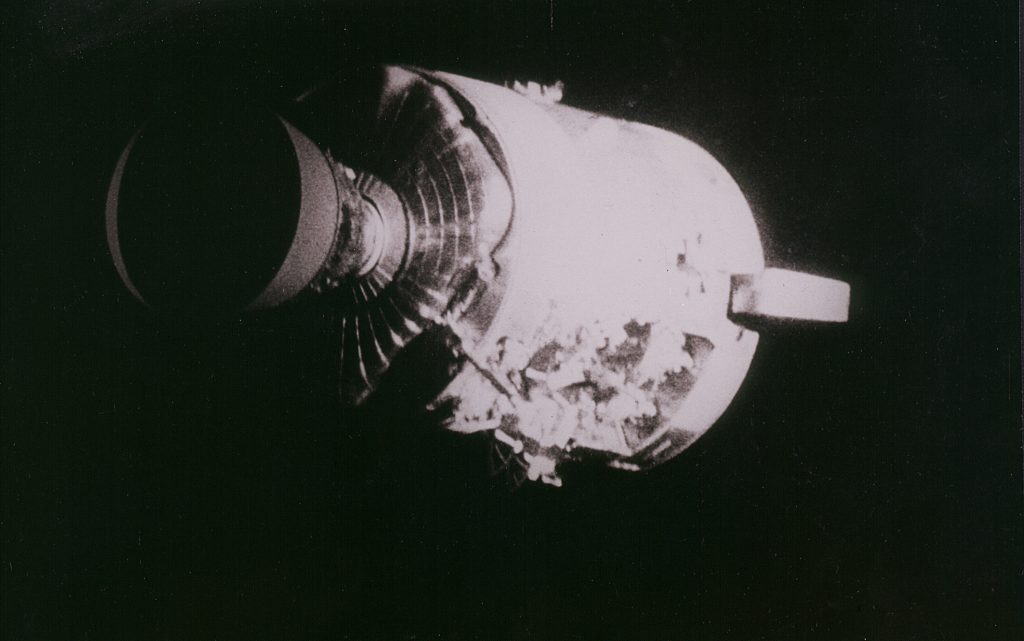 50 years ago, the steely-eyed missile men and women of NASA successfully brought Apollo 13 astronauts James “Jim” Lovell, John “Jack” Swigert and Fred Haise back home to Earth after an oxygen tank in the service module of their spacecraft, Odyssey, exploded, crippling the spacecraft. The Apollo 13 mission would later be described by Lovell as a “successful failure,” a monumental effort conducted by NASA personnel that brought the crew safely home, despite the near-fatal damage done to their spacecraft.

Apollo 13 launched on April 11, 1970 at 2:13 pm EST. Command module pilot Swigert was a last-minute replacement for Ken Mattingly, after discovering that he had been exposed to rubella; thankfully, he did not contract the disease, as Mattingly would be instrumental in helping the ground crew solve the problem of conserving power during the craft’s reentry into the Earth’s atmosphere. During launch, the center engine on the second stage of the mission’s Saturn V rocket shut down two minutes early, with the four remaining engines being left to burn longer to take up the slack, successfully delivering the vehicle and crew into orbit around the Earth.

Shortly after concluding a televised broadcast conducted by the crew on April 14 (this occurred just after 3:00 am GMT, but it was still late evening on the 13th in the US), a short-circuit in the service module’s number 2 oxygen tank caused an explosion, releasing all of the tank’s crucial gas; the explosion also damaged tank number 1, causing it to leak the entirety of its precious contents over the next two hours.

“Okay, Houston, we’ve had a problem here;” Swigert’s report, repeated by Lovell after mission control asked for clarification, would later become an iconic—albeit somewhat altered—quote after being said by actor Tom Hanks in the 1995 film Apollo 13. Although both mission control and the crew had no way to know what was happening at the time, their instruments were reading a power drop on the ship’s Main Bus B electrical system following what they described as a “pretty large bang;” Main Bus A also started showing the same undervolt conditions almost immediately after that.

Aside from containing vital oxygen for the astronauts to breathe, the O2 tanks also supplied the craft’s hydrogen fuel cells with oxygen to produce power, hence the undervolt readings the crew was seeing: despite the air pressure in the main cabin not having been affected by the explosion, Odyssey was effectively bleeding to death.

The disaster prompted mission control to abort the mission, and to commence a new mission to return the crew safely to Earth. With the Odyssey effectively dead in the water, the lunar module, Aquarius, became a makeshift lifeboat for the crew, providing the electricity and life support necessary for the crew’s survival. The LM, however, was only designed to support two people for their two-day stay on the Moon, so NASA personnel on Earth worked around the clock to invent makeshift survival equipment from what was available in the spacecraft, including retrofitting the command module’s CO2-scrubbing lithium hydroxide canisters so that would fit the lunar module’s otherwise incompatible system.

Ken Mattingly, the original pilot for the Odyssey’s command module, worked with John Aaron (NASA’s original “steely-eyed missile man”) and other engineers to devise a crucial power-up procedure for the command module—the astronauts had been relying on power provided by the lunar module in the days following the accident, a resource the craft could not rely on after Aquarius was jettisoned before Odyssey’s reentry. And NASA mathematician Katherine Johnson worked on new procedures that plotted a course for the astronauts to get to that crucial point; in the process she devised a new one-star observation system that would provide the crew with accurate information regarding their location.

The monumental effort made by these teams resulted in the successful splashdown of the command module in the South Pacific on April 17, to be recovered shortly afterward by the USS Iwo Jima. Aside from a urinary tract infection being suffered by Haise, the crew was found to be in good health, receiving a hero’s welcome upon their return to the United States. 50 years later the story of Apollo 13 remains an inspirational story of how unlikely salvation can be snatched from the jaws of disaster through ingenuity, teamwork and the perseverance of the human spirit.

Subscribers, to watch the subscriber version of the video, first log in then click on Dreamland Subscriber-Only Video Podcast link.
2020-04-13
Previous Headline News Post: The Importance of Face Masks or: How I Learned to Stop Worrying and Love My DIY Respirator
Next Headline News Post: Over 70 COVID-19 Vaccines Are in Development, According to the WHO