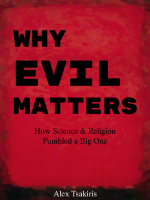 Alex Tsakiris of the Skeptiko podcast joins Whitley for an intense and wide-ranging discussion of evil, what it is, where it is, what it does and above all, why in this age of denial and materialistic skepticism about all things numinous it MATTERS MORE THAN EVER.

From the evil that corrupted and destroyed the Roman Empire to JPL Founder Jack Parsons’ notorious flirtation with people like Aleister Crowley and the rituals they performed to evoke dark entities and powers, they explore what this is and how it works in our world. The organization that Parsons founded, for example, became a repository of secrets, which it remains to this day. The intentions are good, but excessive official secrecy has so corroded public trust in government that it has to be identified as an evil. But what, then, was its origin. Is there somebody–or something–that “wanders the world seeking the ruin of souls” as the 19th Century Prayer to St. Michael would have it, or is it deeper, more subtle, and darker, so intimately entwined in the search for knowledge that it must always be seen as hidden–and very dangerous–aspect of the process of discovery itself?

This is no ordinary “is Satan real or not” discussion. These two guys are way deeper thinkers than that. Join them on their journey to shine the light of the human mind into the darkest corners of evil!

You can listen to Alex’s great Skeptiko podcast in many places. Get started on his website, Skeptiko.com. His book is available in our Amazon store. Click here.