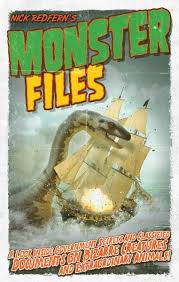 Nick Redfern is one of the best researchers in the field of the unknown and–incredibly–he has found official documentation that many different cryptids that are generally dismissed in the press are taken seriously at an official level.

In this interview, he reveals that there is a surprising amount of official documentation about monsters ranging from bigfoot to weir-panthers to gigantic birds. So settle back for an eerie half hour of first-rate Halloween mystery and a few pretty serious chills on Dreamland’s annual Halloween Special!
END_OF_DOCUMENT_TOKEN_TO_BE_REPLACED

All Hallows is a very special season. It is much more that simply dressing up in costumes and watching scary movies. This week, Whitley Strieber honors both the close encounter experience and the moment when the veil between the worlds grows thin by revealing some new material about his early close encounter experiences that have made him think deeply about the whole meaning of the experience and exactly what is happening. There is a dark side to it, no question, and he makes some chilling revelations about how it impacted his own life. But this is a very deep thing that is happening. To embrace it as ‘good’ or ‘evil’ is not the right path to take. END_OF_DOCUMENT_TOKEN_TO_BE_REPLACED

There is apparently no legally binding definition of the word terrorism in the eyes of the criminal justice system, though it is described by the Oxford dictionary as "the unofficial or unauthorized use of violence and intimidation in the pursuit of political aims," and the US Defense Department describes it as “the calculated use of unlawful violence or threat of unlawful violence to inculcate fear; intended to coerce or to intimidate governments or societies in the pursuit of goals that are generally political, religious, or ideological.”
END_OF_DOCUMENT_TOKEN_TO_BE_REPLACED

Scientists have discovered a mini eco-system full of strange creatures in a remote territory of Australia. The ‘lost world’, as scientists are calling it, is believed to have remained undisturbed for millions of years.

The discovery was made by Dr. Conrad Hoskin, of James Cook University, and Dr. Tim Laman, from Harvard University, who led a four-day expedition to the Cape Melville area of Australia, a region that he had been aware of for a decade but had previously only viewed from above. Their destination was a remote place situated on top of a high plateau measuring 1.8miles (2.9km) by 1.8 miles, and forms part of a larger range of mountains which extends for about nine miles (14.4km) and is around 3 miles (4.8km) across.
END_OF_DOCUMENT_TOKEN_TO_BE_REPLACED